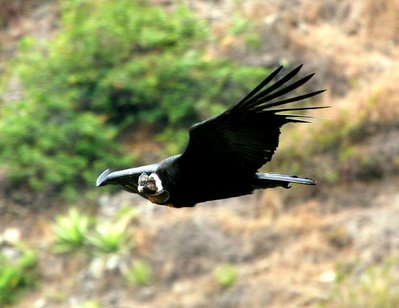 Who would believe that there are condors only 3 hours from noisy metropolis Lima? Well it is true. Here in Santa Eulalia Canyon, we found on Dec 16, 2006 around 12 condors, close to the village of Huachupampa. 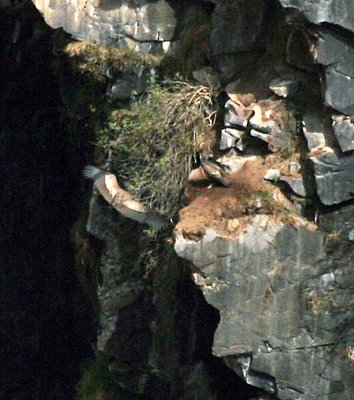 It is quite clear that the steep cliffs make an excellent overnight colony for the condors. Here they can easily find the thermal winds that will ascend them high enough to scan over the area of Santa Eulalia river and over the ridge to the Rimac river. 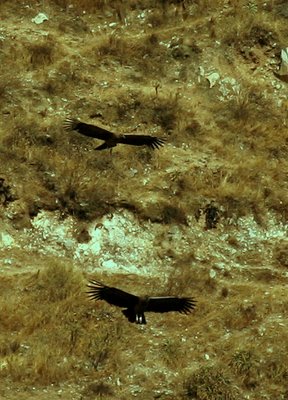 We know for a fact that there are at least 3-4 overnight cliffs in the canyon so there may be up to 50 condors in the whole area. And in difference from many other areas in Peru, they are doing well here. How do we know? Well, by establishing the ratio adults/juveniles one gets a good idea. When the ratio is >1 or more (more adults than young), the reproduction rate is low or the mortality of young is high and the population is therefore decreasing. When the ratio is 1 the population is more or less stable. When it is less than one (more young than adults) the conditions are either excellent and the population is increasing – or in some cases it can be a sign of adult mortality – but the latter would show in low overall numbers. In Santa Eulalia Canyon the population is certainly increasing. Of the 12 individuals we saw only 3 were adults.
The two individuals on the above photo are young birds 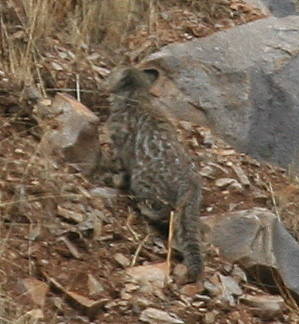 That this area has very good wildlife is indicated by the finding on our excursion of this cat. It is a Pampas Cat Leopardus pajeros. (Thanks to Javier Barrio and Eduardo Ormaeche for pointing in the right direction to its identity.) 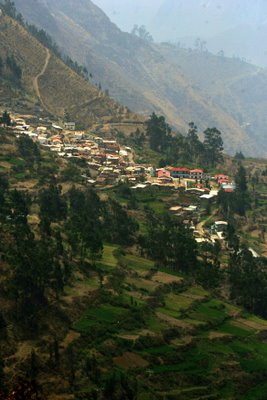 Kolibri Expeditions has started a project of condor and wildlife watching in Santa Eulalia Canyon. 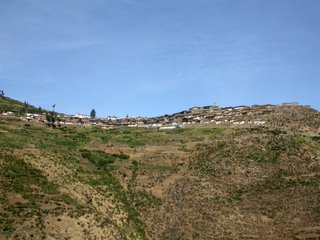 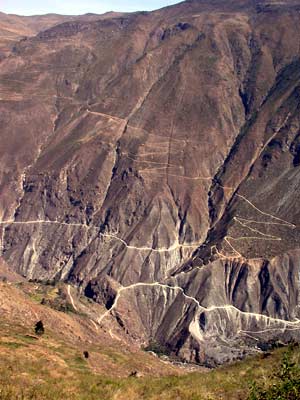 Santa Eulalia Canyon is not as famous as Colca, but it has very dramatic features. The drop in this picture is well over 1000m.

In 1995-96 when tourism to Peru started recovering around 8-10.000 people made the ardeous 10 hour trip to Chivay in Colca Canyon suffering from a dusty and bumpy road and a pass of over 5000m. In Chivay they stayed overnight at 3700m in basic hotels. Cold to the bones and altitude sickness for sure. Next day they had still a 2 hour trip on an even worse road to Cruz del Condor. But condors were almost 100% certain – and at close range. I personally doubt very much that anyone would have past through all that suffering if it was not for the guaranteed views of condors

In 10 years infrastructure has improved. Now there are first class hotels and part of the road has been sealed. Over 130.000 people visited Colca Canyon in 2006. You ask anyone in Peru, where one should see condors and they will send you to Colca Canyon. Now, one can hope for a development in Santa Eulalia Canyon similar to that of Colca. With eco-tourism the condor population in Peru could thrive and it could bring a very welcome income to the forgotten valleys along the Peruvian Andes

Please contact kolibriexp@gmail.com if you want to join us on a general natural history tour to watch for condores. This tour can be arranged at any time. The cost including transport, lodging and all food is only 99 US$/person – with a minimum of 4 people.