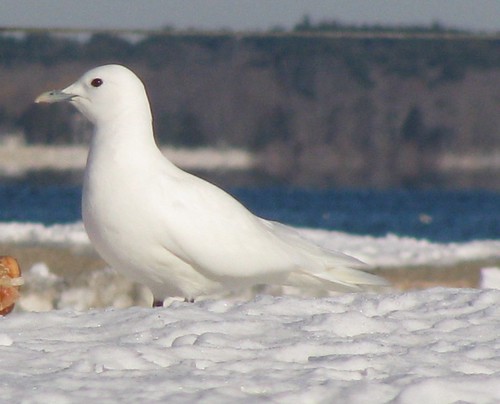 It was winter early 1985. I had been birding only 2 years. Most of my birding until then had been with the local bird club in Stockholm. Any weekend excursion organized and I wanted to go. I guess you could a say I was quite “keen” (or avid …to use a more American term), and the idea of seeing new birds on these excursions was ever so exciting. During the winter of 1984-1985 fewer birds were added as the birds disappeared to warmer latitudes. Then one cold morning  I hear of a bird I hardly knew anything about, less that it could actually appear near Stockholm as a very rare visitor. The Ivory Gull had been found at Landsort – an island south of Stockholm and relatively easy to get to. A check in the field guide showed an exquisite snow-white bird. After some double checking I did understand that this bird was not an adult, but a second year immature with a patchy black mask. Nevertheless, I wanted to see it. The first weekend I could not go for some reason, or maybe I heard too late, but the bird was being fed with hot dogs, so it was likely it would still be there the next weekend.

Weekend came, and I had been approached by some people who were interested in sharing costs of the boat to Landsort. All was coordinated and there were to be two trips to Landsort this Sunday. I happened to end up on the second boat and this made us miss the bird. Only some of the people from the first boat saw the boat. To hear it was seen just a few hours ago and not to be seen again was a feeling of deception that I had not yet gotten used to. It was almost like the same reason I gave up playing chess in my teens. Playing a game for around 5-6 hours only to loose in the end became a complete waste of time as girls were getting more and mote interesting.

Now, on a freezing day on Lansdort, I was thinking of all the other things I could have been doing instead of being wasting my time this way. Yes, I dipped! That great British birder slang for missing a bird you specifically came to see.

Mind you, my trip to Landsort that time was not totally in vain, as I saw my first Steller’s Eider on this trip, and maybe this is the art of dipping gracefully. Be happy seeing other wonderful birds and maybe will the new experiences add to the wholesome.

24 years later I was checking out the listservers in the US and see that my nemesis bird Ivory Gull had been seen both in Gloucester and in Plymouth, Massachusetts. Not smudgy 2K birds this time, but beautifully white adults.

Had I not been going to Brazil, I could have gone on a twitch – again British birding slang for searching a specific bird. A Facebook birder friend, Sheridan Coffey, did a really long twitch. When she heard there was not only one, but two adult Ivory Gulls in Massachussetts, she packed her binoculars to fly 2530 km (1574 miles) to Newark and then drive 370km (231 miles) to Plymouth. It turned out to be quite a journey with lots of delays, but in the end, she and her friends saw the Ivory Gull. She made a very action filled Ivory Gull blog about the quest. Here is her video of the Ivory Gull eating chicken scraps on the ice.

But in spite of birders coming from near and far, the Gulls would not stay forever. Some people arrived just as the bird had left. The dippers!  Here is another blog account by Jim McCarthy about four birders from Cleveland, Ohio, who arrived just a trifle too late. But, just as I had enjoyed my Stellar’s Eiders on Landsort, they enjoyed a lot of other birds on their twitch.

A few years after the Landsort dip, I wrote a song about birding (in Swedish) called Meståg (translated to Birdparty). The song is about my ficitional friend Lasse (Lars). I am sure you are well aware that all the best birders in Sweden are called Lars (Lasse). Lars Jonsson, Lars Svenson and so on…

The third verse contains the story of the Landsort – Ivory Gull incident. I tried to upload to my facebook but apparantly only a few people could hear it as the Facebook mp3 app apparantly does not play in Internet Explorer.

So here it is is again, people….proudly presenting Guran Guran with the number one hit “Meståg”….

All this talk about Ivory Gulls inspired me to do a crude translation to English. Here is the relevant verse in English.

It is freezing cold and a hell of a weather.

He hasn’t seen a bird not even a feather.

So his checking the mails on the local bird server

There’s an Ivory Gull in Massachussetts

I am thinking of getting some people together to record the song again in English – just for the fun of it.

In the translation I took the liberty of changing Lasse’s name to Johnny. So many famous birders and ornithologists named John, right? Come to think of it, what is the most common English birder name. John, David, Bob or Michael? Please comment!