Did I see a Wandering Albatross without seeing it?

Looking through my pics from the last pelagic,while preparing for a blog post, I find this: 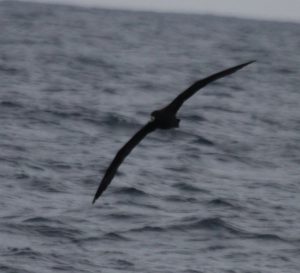 I took the photograph at 11:29 on June 27. Only one shot. I was shooting a lot of birds as they came by. With these proportionally extremely slender wings, completely dark body and a pale face with a dark eye – it fits perfectly to juvenile of the Wandering Albatross group. The only negative thing is that all forms of Wandering Albatross show this pattern and therefore it is not possible to give the origin of this bird.
There were plenty of photographers on board, hopefully someone else has got more detailed photos.

If this can be 100% confirmed from this picture it would be the first record for Peru. Let’s see what the seabird experts say.
UPDATE: The experts spoke. First out was Alvaro Jaramillo on the Birding Peru listserv. He noted that I had totally misjudged the features of the bird. The white is not the face, but rather the bill and the dark spot is not the eye but a feature on the bill.

The pale area is the bill, and you are seeing some of the dark division between the naricorn and the culminicorn, as well as the nostrils head on (the round dark area).

Sergio Nolazco was fast to suggest it was a Procellaria Petrel and suggested either Westland or Parkinson – both that have dark tips of the bill. Alvaro agreed, but suggested White-chinned Petrel instead, as it is not the tip that is dark.

Meanwhile the discussion is hot on my Facebook page and the Seabird-News and Pelagics lists.
Chris Savigny also suggests that the bird is flying my way.

Detail - bill and head of procellaria head on.

I see, it is an optical illusion! When I first looked at the picture, it seemed to me that the bird  was flying away, but it is actually flying towards the camera, and I am looking straight into the tube of the tubenose!

George Armistead hit the nail on the head by highlighting again that bird is flying towards the camera and providing this link of a White-chinned Petrel of almost the same angle of the head.
All of a sudden it is all clear.

For those interested I have started a group on Facebook for pelagic birding. This discussion could have taken place there.

Check it out if you are on Facebook. The group has 741 members as I write this.