Yellow-browed Bunting – gulbrynad sparv – just 3.5km from where I used to live in Sweden

I find it incredible to read about a new bird to Sweden very close – only 3.5km – to where I lived before emigrating to Peru. It almost makes me want to go twitching – fly the 11 400km to Järvafältet where I used to go birding in the 80s. The Sparrow is still twitchable as it since January 3 to January 13 has been seen daily.
I just did the flight with Google Earth and great to see these land features. I naturally checked the pictures on Artportalen – the Swedish equivalent to ebird, where I find a picture from my class mate and birding friend Tomas Lundquist. I am sure he does not mind me showing his picture here. I just wrote Tomas to ask for permission. (No see in over 10 years) 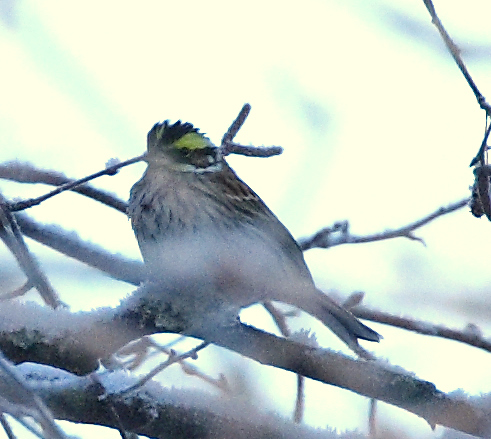 Here is the slightly modified press-release from UPI:

“More than 400 bird enthusiasts traveled to a Barkarby, North of Stockholm to see a rare yellow-browed bunting, a perching bird similar to a sparrow, on the first day January 4.

The seed-eating bird, which breeds in eastern Siberia and winters in central and southern China, had never been reported in Sweden before. It is a very rare wanderer to western Europe at all, with five sightings in Britain since 1998 along with a few in Belgium, the Netherlands and Luxembourg, the Swedish Ornithological Association said.

The pink-beaked, relatively large-headed bird — known for its bright-yellow eyebrow stripe — was first spotted in dry brush in the Stockholm suburb of Norra Järvafältet, the excited enthusiasts told the newspaper.’

There was a bit of turmoil in the camp, veteran ornithologist Henrik Waldenström told Expressen newspaper.

It was very crowded and as soon as the bird or someone else moved, then everyone started running, he said. Fortunately there were no outbreaks of actual violence, but the atmosphere was dramatic, to say the least.

The bird — whose upper parts are brown and heavily streaked and whose under parts are white with an orange hue on the flanks and some fine dark streaks — was still recorded today January 13“.

Great to see and hear from Henrik and Tomas this way. Henrik was somewhat like a mentor to me, as he was the leader of most of the birding excursions I took in the early 80s with Stockholm’s Ornithological Society (StOF) as a beginner (hardcore) birder. Tomas and I took the field course of Ecology at Tjärnö on the coast of SW Sweden one summer (1987 I think it was). On the way to get there, we twitched a Siberian Golden Plover, which included a rented car and a separate train/bus journey to get to Tjärnö – a significant cost for poor students! At that time it was my most expensive lifer!

Yellow-browed Bunting  is known with the scientific name Emberiza chrysophrys. The epithet read in Swedish could be pronounced with a Swedish accent “kryss-å-frys” – which literally means “tick-n-freeze” – how suitable!  Temperature in Stockhom right now is around freezing point -and I am enjoying 25 degrees Celsius and am going for a run shortly. On second thought, I think I will content myself with the Google Earth twitch I just did. Brrr!
Don’t think we shall get a mob of 400 Peruvian twitchers going crazy, if there all of a sudden would be a White-throated Sparrow showing up among the Rufous-collared Sparrows at el Olivar park – around 3.5km from my present home.

Next Post: Birds were the cause of the US Airways plane crash landing in Hudson River