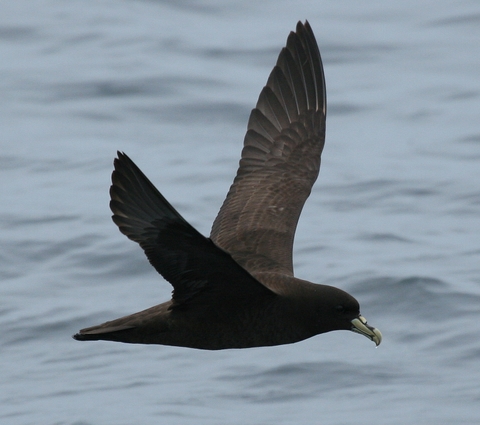 Alvaro Jaramillo is one hell of a birder. Born in Chile, but grew up in Toronto where he started birding and eventually specialized on Icterids leading to the publication of New World Blackbirds The Icterids

. He is particularly fund of seabird and have lead numerous pelagics on the Humboldt Current, Antartica  and in Californa. He is a popular guide for Field Guides. He lives with his family in Half Moon Bay, California. Alvaro is also one hell of a nice guy. I am much obliged for a half day he took me birding when visiting California several years back.
Recently, he struck gold as he was leading pelagic birdwatching tours off his home of Half Moon bay organized by Sequoia Audubon Society when the California’s first White-chinned Petrel was found and photographed. The week before Short-tailed Albatross was seen.  He posted a note on BirdChat of his encounters which presently can be found on birdingonthe.net.  He writes:

I had the pleasure of being on a superb pelagic trip right out in my backyard, off Half Moon Bay, California yesterday. Sequoia Audubon Societyorganized this fantastic, trip – thanks Jennifer Rycenga and Gary Deghi for helping to put this together. To give you all some background, I have lived here over a dozen years and we have not had any pelagic trips until last week when the San Francisco Bay Bird Observatory organized one as a fundraiser. This trip ended up finding three species of albatross, Black-footed, Laysan and the ultra rare Short-tailed Albatross. 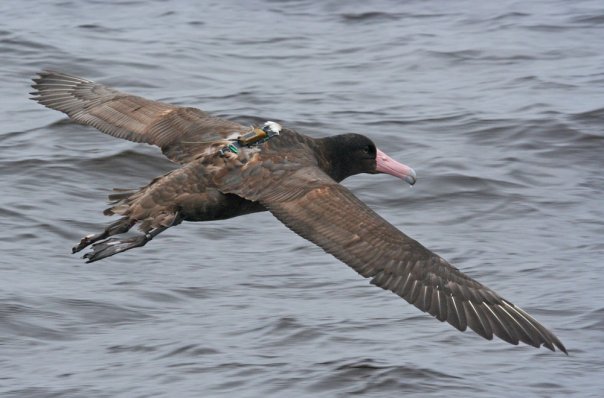 The latter is a highly endangered with just over 2000 individuals. The Japanese are trying to establish the albatross on several other islands to minimize the chance of the entire breeding population being wiped out by volcanic activity or a typhoon. The bird we saw was one of these translocated albatrosses which was sporting a satellite transmitter! It has been great fun learning more about the travels of this bird from the researchers, as well as its history. Amazingly we saw it off central California and a week later it was off Vancouver Island in BC! When they want to move, they go.

We thought there was no way to top last Sunday’s trip, yet we did! Amazingly just after lunch time we saw a dark chocolate colored bird with pale bill that was coming up behind the boat. Obviously, in California waters the default should be Flesh-footed Shearwater as the only thing that fits that general description. But it looked off, as it came in closer, and it became clear that this was a petrel in the genus Procellaria. It was too bulky, with a short tail, thick-neck and had the fulmar-like quality of  looking down at an angle rather than keeping the bill straight ahead as in shearwaters. The default then becomes Parkinson’s Petrel which has been seen in California, but that was wrong too!! This bird was too big, larger than Pink-footed Shearwater and had a dull yellow bill all the way to the tip. I have to admit that I had absolute goose bumps when I realized that this was a White-chinned Petrel, a species I know well from South America – but in California! We were wonderfully fortunate that the bird chose to do some close passes by the boat, and that with some quick chumming from Phil the deckhand we were able to get it interested enough in us to park itself on the water behind the boat. At this point all participants were able to have a look at the bird, and take in the features we were calling out to identify it. As well there were plenty of cameras on board and the bird was duly documented. 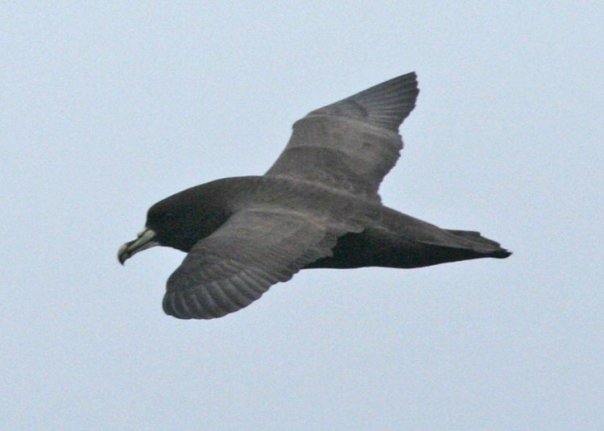 More photos of mine can be found on my web-page. Also have a look at these better photos from John Sterling and Kris Olson.

If accepted by the California Bird Records Committee this will become the first for the state. Not only that, it is only the second for the continent. The first being a bird found moribund on the Texas coast which was taken to a rehab place. The bird was photographed, and actually identified years later as being a White-chinned Petrel rather than a Sooty Shearwater as it was identified at the time. This Texas record has been contentious as the petrel is a real cold water species, and Texas waters do not offer it the habitat it prefers. Suggestions were made that it may have been a bird brought in on a ship from the south, or at least ship assisted. No one will ever know of course what the history of the Texas bird really was. But it sure is nice to find a White-chinned Petrel in cold California waters, side by side with species like the Pink-footed Shearwater which share its habitat in the Humboldt Current off Chile and Peru.

This was one of those amazing birding moments, when all came together and we connected with a great bird which just brought absolute happiness to our gang of birders. We marveled at the bird and reflected how when trying to explain to a non-birder what is so exciting about birding, how attempting to explain this particular exciting moment in our birding lives would be difficult. All of that ocean, so much of it, and one White-chinned Petrel happened to cross to the wrong hemisphere and we just happened to be where it was, the chances of that encounter boggle the mind. But it happened, and wonderful things of all types happen when birding. Aren’t we lucky we have this hobby?

I had to ask Alvaro:
Gunnar: Did you ever think that the area could be so good, did you have a hunch or was it a complete surprise to you?

Alvaro: I figured it would be good as it is good to the north and to the south, I just wondered how easy it would be to get to the shelf given weather and winds. Thus far it has not ben too bad.

Anyone wanting to do a pelagic from Half Moon Bay this weekend should contact Debra Shearwater. The Saturday trip is sold out, but there is still space on the Sunday departure.

Next Post: Eastern Crowned-Warbler draws crowds in the UK