I just checked Birdchicks blog, where she is in Oklahoma looking for Lesser Prarie Chickens and other birds. However, today instead she is blogging about North American porcupine (Erithizon dorsatum) which is not uncommon in NW US. This caused me to remember that I still had not uploaded my crappy pictures taken with my Blackberry in Manu last year. It was my first encounter with a porcupine ever, so to me it was a major happening seeing a new mammal – as new birds are getting fewer apart on the more familiar routes that I am doing. Never to late. Here they are. 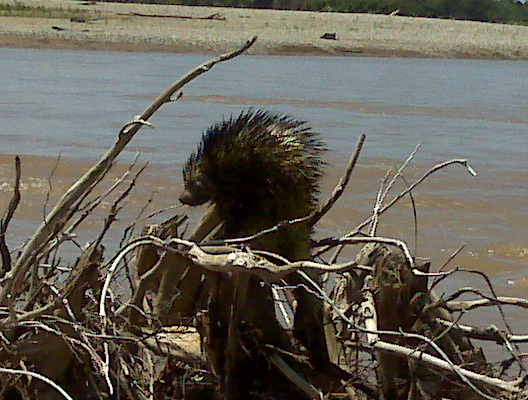 We had just visited the famous Macawlick at Blanquillo a few hours down river from Boca Manu. That morning was great with a hunting Ocelot also attaining the lick – luring to try to catch a macaw. On the way back as we canoed back I noticed a strange shape on the roots of a fallen tree in the river. I thought it was part of the roots at first, but soon realized it was some strange animal. We could approach quite near. Unfortunately, I was the only one having a camera handy – on my telephone! Apparantly, it is a good swimmer cause it was not there when another group past later.

According to Emmons “Neotropical Rain Forest Mammals” the only Porcupine in range is the Bicolor-spined Porcupine  (Coendou bicolor). Normally, it should have white tips on some spines, but some are completely dark. Several days further down river there is another species – the Brazilian Porcupine (Coendou prehensilis). I don’t suppose it would swim upriver to confuse us? 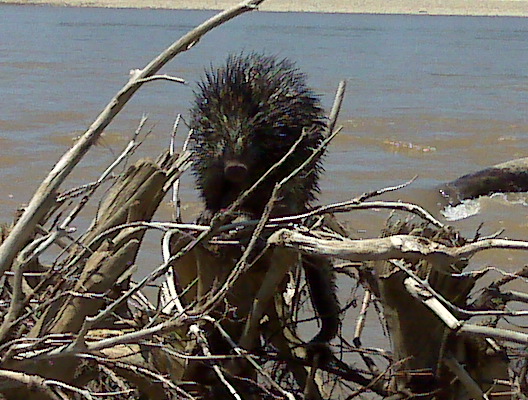