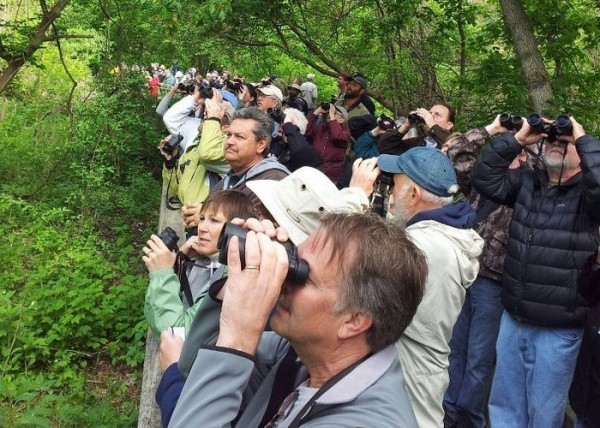 People nowadays get interested in birds via digital photography and learning from online sources. New birders are digibirders! Perhaps there  is an ongoing paradigm shift in birdwatching.

Those were my premises for the new blogging series I have been working on some time, and which has resulted in less activity on this blog.  I wanted to produce a manual to birdwatching in the digital age which approaches birding from this new entry point.

As usual with the new ideas and approaches there will be those who cling harder to the old ideas.  It has been a bit stormy, and perhaps some people did not understand my motives behind this.

I thought that if we could lead thousands of newbies from the new and in many way natural starting point in the digital age, with the internet and the digital camera, perhaps these new digibirders could be led into the arms of the birding and naturalist organizations such as the ABA, Audubon and ABC, who do so much good and who could do with some more members.  If not, the risk is that they simply would be content to be digibirders and never learn about conservation or birding ethics.

Additionally, the idea was that by leading the new birders in this fashion some would eventually bloom and become really good birders,  safeguarding the birding as we know it. Namely, the Art of Bird Identification.

If we make an ebook,  free for download and free to spread among friends, on blogs, on Facebook, Google+ and Twitter, this could have an enormous impact. If we additionally, get some well known birders behind the idea with their endorsements and perhaps writing a few chapters, the paradigm shift may also become accepted by the critics, and birding would all of a sudden become mainstream, albeit mostly with a different focus compared to listing and field skills today.

In September last year I started writing the posts and presented the ideas to several people to see if I could get some of the friends from the bloggersphere to help out writing on topics they know much better than I. Said and done. The project is on.  Below are the posts published to date.   Check them out and follow the series from the beginning.  T
If you know someone who has just started to become interested in birds or someone who you think should get into birding, do them a favor and send  them this way. They will be very grateful to you.

The  seven first posts are intros to get some momentum to the blog. In post 8, the chapters of  the forthcoming ebook and their authors were presented. Post 9 and 10 are the first two chapters which will be included in the ebook.

1. You don’t need binoculars and a field guide to start birding. You need a point and shoot camera and an internet connection.  That was the essence of the first intro post. And it started a riot! In some Facebook discussions I have said I deliberately wanted to be controversial. It became a controversial statement, and perhaps that was good to gain some notion for the series. But it was not deliberately controversial, because I see this happen every day in Peru, where there is no traditional birdwatching movement. People here rather get a camera to shoot birds than binoculars to look at them to start with.

Given from the comments I have seen later, it is looks like this trend is also happening in countries where there are strong birding communities, although some either don’t want to acknowledge this fact or in some way feels superior (or certainly different) to those who only takes photos with no clue. They say bird photographers are not really birders.  Perhaps in the true definition they are right, but to promote birding their attitude is to self serving and will only scare away those digibirders who have the potential of becoming truly good birders in the future.

2. It used to be so hard.
Before it was overwhelming to try to identify birds on your own. Now you can answers on the internet.

3. How to get a kid interested in birds and nature.
Say you have kids and you really would like them to become more interested in nature, but they are more into to TV and computer games.  You are tearing your hair with the potato couch kid. You read some manuals about birding, which all invariably recommend getting a pair of binoculars first of all.  You have $350 to spend. Binoculars or Point and Shoot Camera?

4. Birding is easy. Birding is massive.
If there are 48 million people in the US who have enough interest in birds to call themselves birdwatchers according to recent national survey, why are only 0.1% included in the birding network of some 50,000 active birders. 99.9% are not engaged in the birding movement. Maybe we are doing something wrong? Or at least we could do something better.

5. Why birds, why not bug or mushrooms?
Short post praising the diversity and the beauty of birds.

6. Digital Photography. The nature watching revolution.
There is no doubt that it is digital photography which has brought the change  of paradigm on to us. Where will it go from here? What does it mean for nature watching clubs?

7. The rewards of birding.
How do you measure the success as a birder. Listing milestones or likes and shares for a photo of Facebook?

9. Birding resources on the web. There are field guides available on the web. Both for newbies and more advanced birders. If you still can’t figure out which bird you photographed, then you can upload it to a number of sites. It will usually only take a couple of minutes before you have an answer.  This is the first chapter in the ebook.

How will birdwatching be 10 years from now?

You are invited to a Google Hangout, which is like a webinar, where we shall discuss how birdwatching will be 10 years from now?

UPDATE: This is the edited recorded session between Robert Mortensen and Gunnar Engblom. Unfortunately, Gunnar’s laptop overheated again and the session was broken pre-maturely.

The last question which Robert started answering. Should the membership organizations, such as the ABA actively try to recruit from the new huge group of people who got into birds via digital photography, or should they remain as an organization principally geared towards those who are interested in the fine (somewhat “intellectual”) art of bird identification?

Next Google Hangout will take place on Thursday at 8 pm Eastern time. Join us, then.