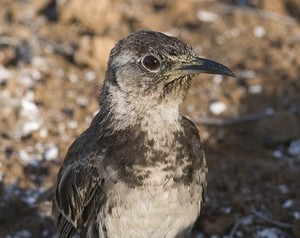 In news releases yesterday (in for example BBC and Telegraph) it was announced that DNA had been extracted from specimens of Floreana Mockingbird that was brought back to England by Darwin himself.
This DNA was compared to DNA from the existent subpopulations on the small islets Gardner and Champion off Floreana.  The Floreana Mockingbird became extinct on the main island Floreana soon after Darwin’s arrival due to the introduction of livestock, rats, cats and dogs which soon became feral and now this rare mockingbird only persists on these small islets with a total stable population of around 100 birds in 2007. Floreana Mockinbird is listed as critically threatened by Birdlife International. With such small population, it is clear that it could soon become extinct if there would be any natural disaster of any sort. The main strategy for the survival of the species must include a plan of restoring the population on the main island. The DNA tests confirmed that, in spite of in-breeding on the small islands, the genetic material is basically still the same and that an introduction with mixed stock from both islands at least would be genetically fit to once again occupy the main island. The main problem is not the DNA, but getting rid of the introduced animals. In an article from Galapagos Conservancy the Floreana Mockingbird Restoration Plan is discussed. An eradication campaign of feral animals and restoring Opuntia cactus habitat has already been started.

More background information from the researchers.

The two articles from BBC and Telegraph are a bit shallow giving headlines as if the Mockingbird on Floreana will be restored with the DNA of Darwin’s bird (sic!). But I found this blog from last year by the researcher Karen James, who was doing the DNA tests that were referred to. Now this is interesting reading: Saving Darwin’s Muse

I also found an article by researcher Paquita Hoeck about the current population in 2009, which now estimated to around 500 birds, due to two very good years for reproduction. This is great news for a forthcoming restoration on the main island.

How to see Floreana Mockingbird?

It used not to be too difficult. Any boat passing by Floreana could just go close to Champion island and the birds could be seen from deck without actually not landing. Now, researching for a birder’s trip to Galapagos, I found out only small boats that are allowed snorkling or scuba-diving around Champion and Devil’s crown off Floreana have permission to be in the area. There is obviously still landing restriction on the island, but the species should not be difficult to see if you are on the right type of boat.

Previous Post: The Jamaican Petrel, is it extinct or alive?

Next Post: Pishtacos – Human oil extractors – The Bogeymen of Peru.