How to become world famous in a day? 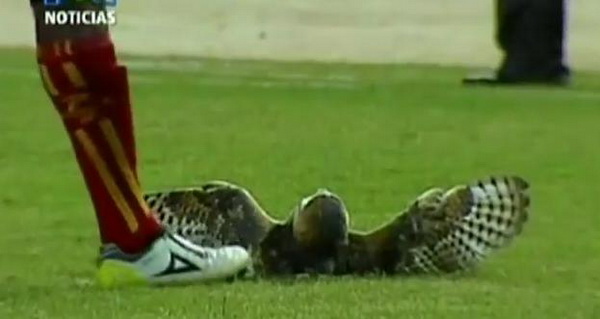 Either you do something sensational – or you do something really stupid. It is quite clear that the latter is far easier to bring you world fame. Take this football player from Panama, Luis Moreno, who plays for the Colombian team Deportivo Perreira, for instance. He kicked the Barn Owl, that lived on top of the Roberto Meléndez Stadium in Barranquilla and which home-team Junior Barranquilla had made official mascot. The Owl had  accidentally entered the football ground during the ongoing game and had just been hit by a ball, the game stopped and a few seconds later it got a final kick that looks gut-turning disgusting on the video-flcks on You Tube.
That was a very stupid thing to do – and now he is famous all over the world. Infamous is a better word.

But did Luis Moreno purposely kill the owl?

How could anyone sane be so incredibly cruel? Why would anyone want to hurt the mascot of the opposing team? Let’s analyze the situation.

He says to the press he did not mean to hurt the bird and just wanted to get it over the sideline. I have no reason not to believe him.

In the end,  it was probably not Moreno who killed it but the sum of the hits, the shock and the handling. It was still a stupid thing to do!

After the incident Moreno will face suspension and fines from the Colombian Football Federation and has received death threats.  He says he is regretful, did not mean to harm the bird, and thinks the world is over-reacting. Best to leave this sad incident behind and get on with it, he adds.
Wrong, totally wrong strategy.

I have done a lot of stupid things in my life, often not realizing the consequences at the time of action. But seemingly none of my mistakes have been stupid enough to make me world famous.  What does one do for damage controle, when one does something stupid? Just ask for forgiveness does not put things right.

On top of everything his daughter is throwing out insults to left and right against Colombians in general on her Facebook,  becauseof the hate messages directed to her dad.

Shouldn’t this guy start donating to animal welfare charities and do some penance work instead?

Put yourself in Luis Moreno’s owl-kicking shoes. What would you do if you were him?