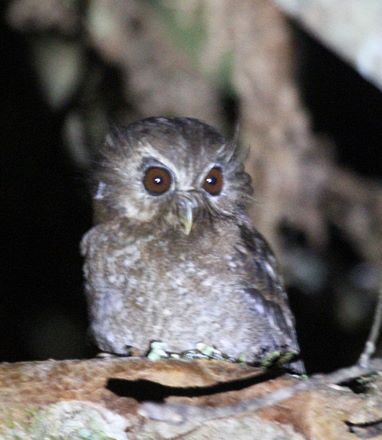 Ever since I read the news about Shachar Alterman’s discovery and filming of Long-whiskered Owlet near Esperanza on January 25, 2010, I had the intention to do a blog post interviewing Shachar.  Finally got all the ingredients together – that is time in front of the computer and the inspiration.

The Long-whiskered Owlet Xenoglaux loweryi was first found on an LSU expedtition in 1976 and described in 1977. It should take until 2002 until Dan Lane and other LSU researchers obtained a recording of its song, after having mistnetted one and kept it in the tent overnight. In February 2007 David Geale and Juvenal Ccahuana managed to find and photograph one in the wild (outside a mistnet) for the first time but again far from the road on a gruelsome trail within the ECOAN conservation area at Abra Patricia. In May 2008 Frank Lambert and Nick Athanas found and recorded one 50 meter from the Long-whiskered Owlet Lodge.  A few people have heard it at the Owlet Lodge since, but as far as I know no more sightings.

When I was with a group at the Abra Patricia Lodge, I check an email giving details about yet a new site for the Owlet, very close to Abra Patricia. The Long-whiskered Owlet had been video-filmed for the first time by Shachar Alterman.

I got a mail from Shachar the other day asking if I would not consider to bring birders to the Esperanza site where he filmed it. Interesting prospect! Could it really be possible to sell a trip including a long muddy walk, sleeping in a moist hut with lack of the cosy comforts of Abra Patricia Lodge just a stone’s throw away. After reading Shachar’s great account about his search for the Owlet (highly recommended reading), I was even less sure it could be done.

BUT…..Maybe, if one considered the following:

To get a better idea what to expect I interviewed Shachar and Noga Shanee. Noga is founder of  Neotropical Primate Conservation.
How come you ended up going on the primate expedition? Did you specifically look for the owlet?

Shachar: I first visited Peru last July on a two-weeks birding trip with a local guide name Eduardo. Our main target species was the Owlet. We spent four or five nights in the LW Owlet lodge, and I only imagined hearing it once. On returning I published a small diary in an Israeli news-site. Noga Shanee, the co founder of the NPC read it and made contact, claiming they have the Lechucita in the forests near them. Of course I didn’t believe it a bit, but when she contacted me a couple of months later, looking for a birder to volunteer in a survey they were doing in some potential nature reserves, I jumped at the opportunity.

This led to a one month journey in some of the most remote corners of the north-eastern Andean slopes, and to many unforgettable birding and nature experiences (Read Shachar’s great tale on the Owlet expeditions here. ). The highlight of course was the discovery of the new LW Owlet’s population in the forests above La Esperanza on the 24th of January this year.
Tell me about the infrastructure at the camp site. Are there beds or mattresses to sleep on. Any cooking facilities? Can porters be arranged from Esperanza?
Shachar: Housing in La Esperanza is very basic. I slept in the volunteers’ apartment, but Noga, as part of her project, is insisting on Lodging the visitors in the house of the local village people – running water, matresses and food included. In the forest itself we all sleep in a forest hut, equipped with basic beds and matresses (a sleeping bag is still needed), with running water nearby and a burning fire to cook food on. No porters were hired, but you can hire horses to carry your equipment to the hut. The walk itself is steep and very muddy (boots are heavily needed), but in a slow pace you can make it in 3-4 hours. I did it with a heavily loaded backpack but it would have been much easier with a horse close by. 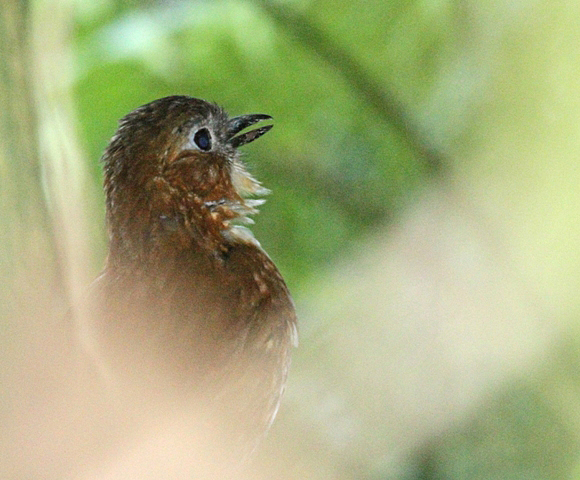 What other birds can be seen on a trail?
Shachar: Noga got a full list of  birds watched regularly in and near the forest. I can mention a few: Rusty-tinged Antpitta (abundant and very responsive!), Chestnut-crested Cotinga, Lulu’s Tody-Tyrant, Rufous-banded Owl,Vermiculated Screech-Owl and White-throated Screech-Owl, along with the usual mixed flocks in these altitudes. 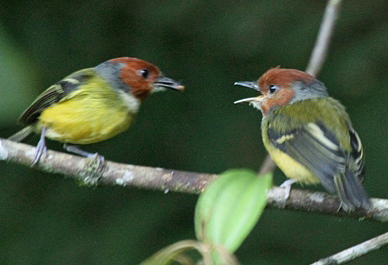 It is worth mentioning that the forest is rich with other very interesting wildlife: the endemic Yellow-Tailed Wooley-Monkey and Nocturnal Monkeys, Ocelot (we ran into a mother and a cub the night we found the Lechucita) and the Spectacled Bear are seen quite regularly there. 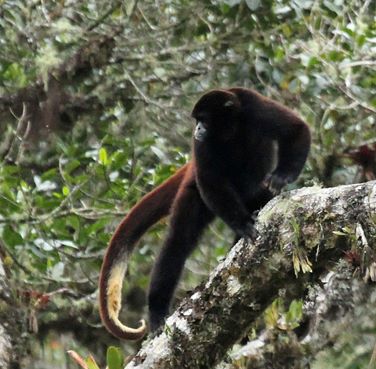 What can you guarantee for a group that only have one shot – by staying one night at the campsite? I heard from my friend Noam Shany that he also saw the owlet recently. So could you go through the positive and negative sightings since January?

Shachar: As for the Owlet, I believe chances are very good, and frankly, can’t think of a better place. The night we found it, it took us less then an hour, and we heard at least another five. The following expedition succeeded on tracking it, but a second before lighting on it a group of nocturnal monkeys just scared it off… So they got only a glimpse of it flying. Noam Shany’s group spent 3 nights there, because it was heavily raining, but succeeded of seeing it for one second – ome meter away of the group! – before it took of. Noam told me he wants to go back there and have another go. Noga told me a 4th group went there and succeeded in seeing it very closely and for a longer time. So, by now the statistics are very very good – 4 out of 4, even though not all sightings were as satisfying as the one we had.
Noga: It is actually 5 times out of 5 now, as. I went to an area which is a little bit further and three individuals answered me simultaneously. The first time we heard it in June 2008, was never really confirmed, the guy didn’t use playback and couldn’t record it well enough to recognize, but he was sure that he had heard it.  June may actually be a good month as it is supposed to be dry season and the trails will be easier to walk.
When it was recorded were there any common denominator of the weather conditions, full moon, overcast, rain, etc?
Noga: Nothing I can think of, from my experience during nights here in the forest, there are nights when the forest is all alive and noisy and nights where it seems totally abandoned. These can be consecutive nights, so I don’t think that it has much to do with the moon. We never tried to look for the owlet in the rain because her call is very quiet and we would not be able to hear it through the noise of the rain.
Has anyone tried to worm feed the Ochre-fronted Antpitta?
Shachar: Unfortunately no Ochre-Fronted Antpitta was located in these forests yet, so can’t tell you much about worm-feeding there.
The description of the lodging conditions at Esperanza in Shachar’s article does not sound too inviting when people could stay in Pomacochas or Abra Patricia very comfortably.  I am sure many of my future groups would prefer a hotel than the basic overnight conditions in Esperanza – and opt only for one night in the forest hut. Is this at all possible?

Noga: Shachar was  over reacting a bit, I lauged a lot while reading his shower description. It is not too bad. We would like the communities to have as much income as possible, but you are welcome to sleep in Pomacochas or Abra Patricia, come here in the morning and start walking to the forest. There is absolutely no problem with that.
Why is the Esperanza site better for the owlet than the Owlet trail at the Owlet lodge?
Shachar: My answer is very simple: At La Esperanza you get to see the Owlet. At Abra Patricia Owlet Lodge you only pay for it;-). Having said that, I thoroughly enjoyed my time at the Owlet lodge, we saw a lot of great birds and the staff there were wonderful.
What are the chances of Yellow-tailed Woolly Monkey? It is a species I have long wished to see, and it will certainly be a good bonus.
Noga: There are 6 groups of yellow tailed woolly monkeys living around the area where you would be visiting. There is a 99% chance of being next to at least one of the groups,  however, they are sometimes very quiet and hard to see. Usually you can at least hear them, and we see them all the time. You would need a bit of luck, but it is probably the best place to see this species.
Noga, you mention Andean Night Monkey in one of your mails. What is that? A different form or a good species?
Noga: Aotus miconax, good species and endemic to Amazonas and San Martin,
Unstudied, Vulnerable, but very easy to see here.
Gunnar: Wow, another endemic monkey species the. I was not aware of this!
Someone ought set up monkey watching trips – as there are three endemic primate species in the region if one include also the Rio Mayo Titi-Monkey lower down.

What altitude is the Hut?

Noga: Altitude of the hut is about 1900m. Lower than Abra Patricia, although the trail goes up and down

Future of Yellow-tailed Whoolly Monkey and Long-whiskered Owlet at Esperanza?

I am not going to give you all the anwers because I don’t know. Let’s discuss the issue here in the comment section. Will birders pay at Abra Patricia when most species can be seen from the road or on the Esperanza trail?

I´ll only answer this question myself before letting you loose. A definite YES!! The fee is for using the trails, visiting the feeders and use of the observation tower is $US20 which I believe is a one time fee, although this should be checked. The trails give access to species like Cinnamon Screech-Owl, Wattled Guan, Royal Sunangel, Ochre-fronted Antpitta, Bay Antpitta, Bar-winged Woodwren, and Cinnamon-breasted Tody-Tyrant that still have not been recorded on the Esperanza trail. Also, the trails are very well maintained.  Behind the lodge at I have seen the rare Rufous-vented Whitetip. The lodge area is also great for White-capped Tanager. Staying at the Lodge is 80 dollars per person plus 20$ for each meal (the trail fee included is included for those that stay at the lodge).  In contrast staying at Esperanza is 20 soles per person (roughly $7.50 and 4 soles for meals  ($1.50). I imagine that most birders shall end up staying at Abra Patricia anyway because comfort is just so much better, and even if one go to rough it for one night, most people want to come back to the comfort at Abra Patricia.

What do you think is the best strategy for the locals to get birders and primate lovers to stay at Esperanza? Is it viable to attract birders to this project with such basic conditions? Would you be willing to go? So should the new site be seen as a threat to existing eco-tourism business at Abra Patricia, which is empty during long periods? Interesting questions and even more interesting are your comments below.