We did a short trip on the ocean on Nov 18, although the plan was to make a full day pelagic there was no suitable boat available. This was the same trip as the swim-with-the-sea-lions post the other day.
The day was not totally at loss, as there were good photo-opportunities and a few identification challenges.

As we were approaching the port again after the Palomino trip, I spot a distant Skua. Unfortunately, there were not more photos than these poor ones. 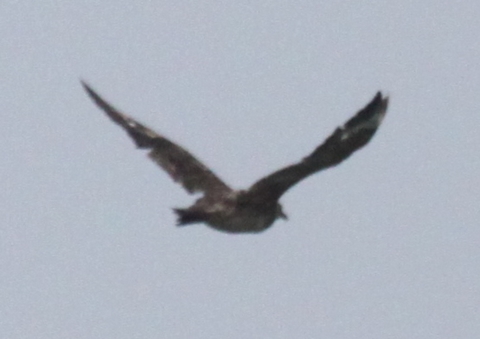 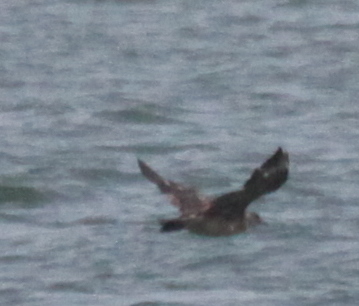 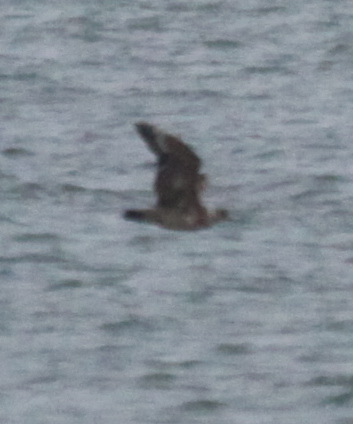 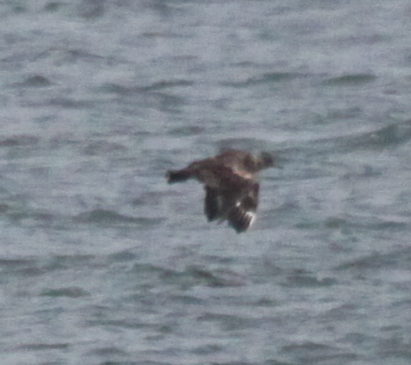 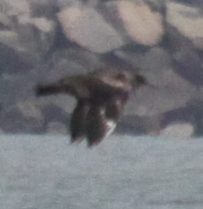 The pictures are very poor. First when looking at the pics, I thought I could see some reddish tone on the belly which suggested Chilean Skua. However, there are several details that support South Polar Skua which I ultimately think this bird is:

I agree that the skua photos are marginal. Still, this looks much more like a worn and messed up young Chilean Skua than a South Polar. Isn’t it molting outer primaries? Did you notice this in the field?

As for the Skua, I saw Ryan Shaw’s pic on the Facebook group – pelagics of a molting South Polas Skua
Her is the FB link.

and  I thought it was contemporary with my pic i.e. taken in November.

However, it was from July. Yes, my bird is missing an inner primary at least on the right wing. Do Chilean and South Polar Skua vary that much in molt-time? If so, I should pay some more attention on this.

What about the very pale neck. Can Chilean also have this?

Its not a rule, but a good “rule of thumb” to think that birds which have no or short migrations will have different molt timing than those which have long or amazingly long migrations. South Polar Skua falls into the amazingly long migration category, Chilean into the short migration category, or moderate at the most. So molt timing should differ in these two species, and it is well known to be in the May – August time frame for South Polar when they are in the northern hemisphere; not clearly known in Chilean yet. Timing also varies depending on age, with younger age classes molting earlier than adults. Having said this, retention of juvenile feathers for a long time (sometimes over a year) in the first cycle of many large birds (various seabirds for example) can also cause some weird patterns when you see them in terribly worn states. As well, often feather bases are a different color than feather tips, and the fading process itself can lead to odd patterns showing up. So it is complex, and the way to go about figuring all of this out is to photograph everything, and determine when molt periods are, and if birds you are seeing fall into more than one group of molt periods (= different age classes). But when you have a terribly worn and then molting individual, especially of a dark species like a Skua, all sorts of weird patterns can show up. For example, it is common for Westland Petrels off Chile in November (when they are worn and in molt) to show nearly white panels on the upperwings. These are incredibly worn and faded coverts which have not yet been replaced; probably a first cycle bird retaining juvenile feathers. The pattern is as bright and obvious as that of a Pintado Petrel! It is weird when you see it the first time, but after seeing it over and over again, and noticing that it only shows up only on Westland Petrels in November; I have found it to be an easy way to identify some Westlands from a long way away. Weird patterns are sometimes predictable and usable, but you need to determine their pattern of occurrence. I think that all of the weird and messy skuas you have shown us over the years have been Chileans, yet the 1 or 2 photos of good South Polars from Peru are relatively clean looking (or am I remembering this wrong?). From this perspective it may be safe to use the worn and messed up look to actually identify these birds as Chilean!!

Continuing in this train of thought – Is that really a pale neck? Or is it a patch of retained worn juvenile feathers contrasting with newly molted crown/face feathers? In other words, a feature such as a pale neck in the context of a worn and messy looking skua is not all that useful. Similarly near lack of cinnamon feathering on the underparts is also something that is common on worn Chilean Skuas, although with a close look you will see some feathering with warm coloration somewhere. 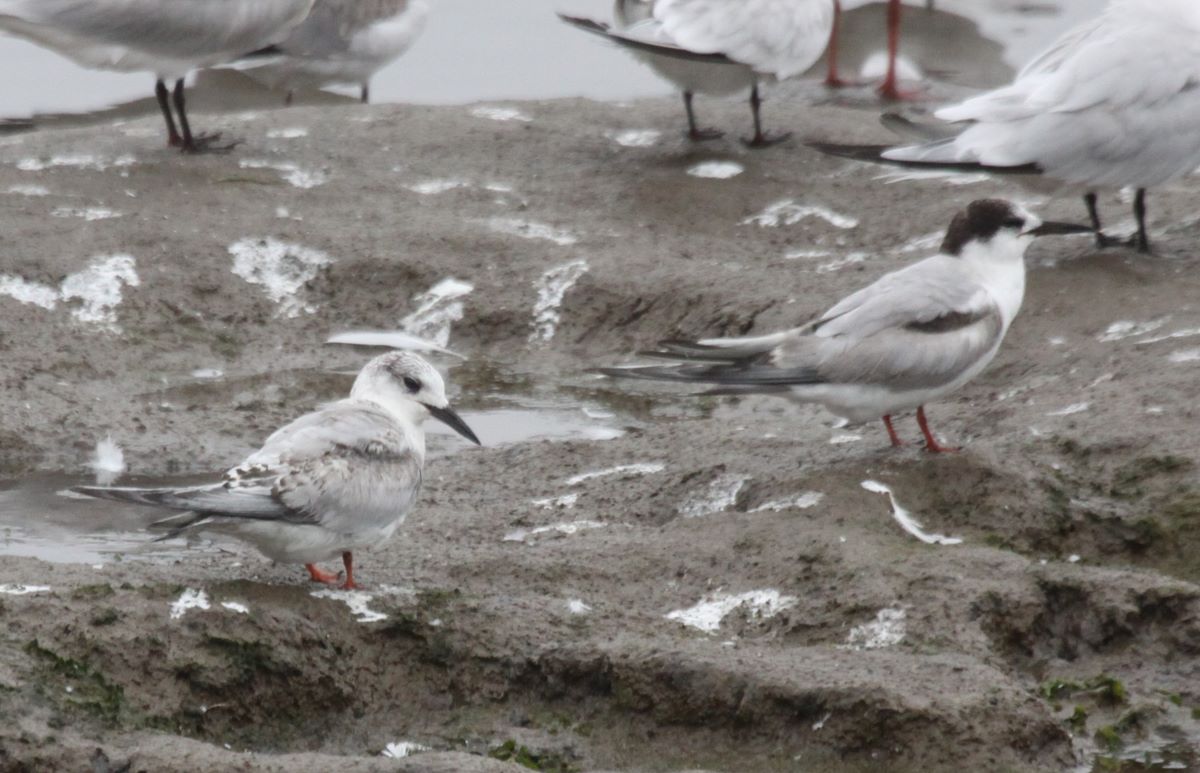 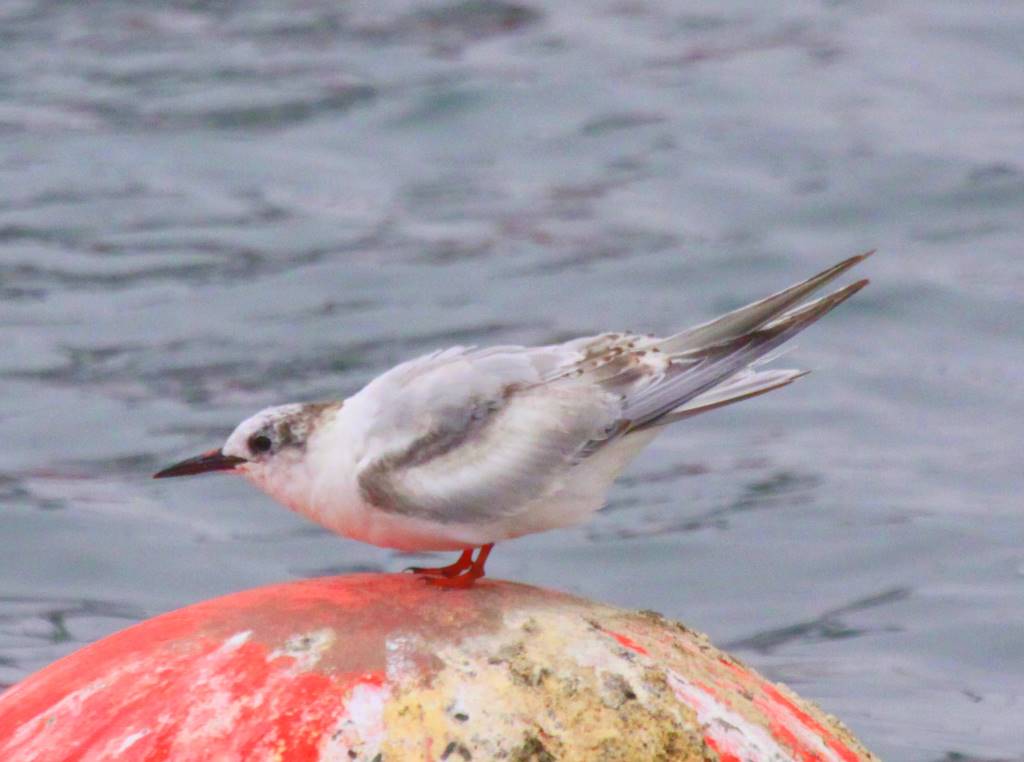 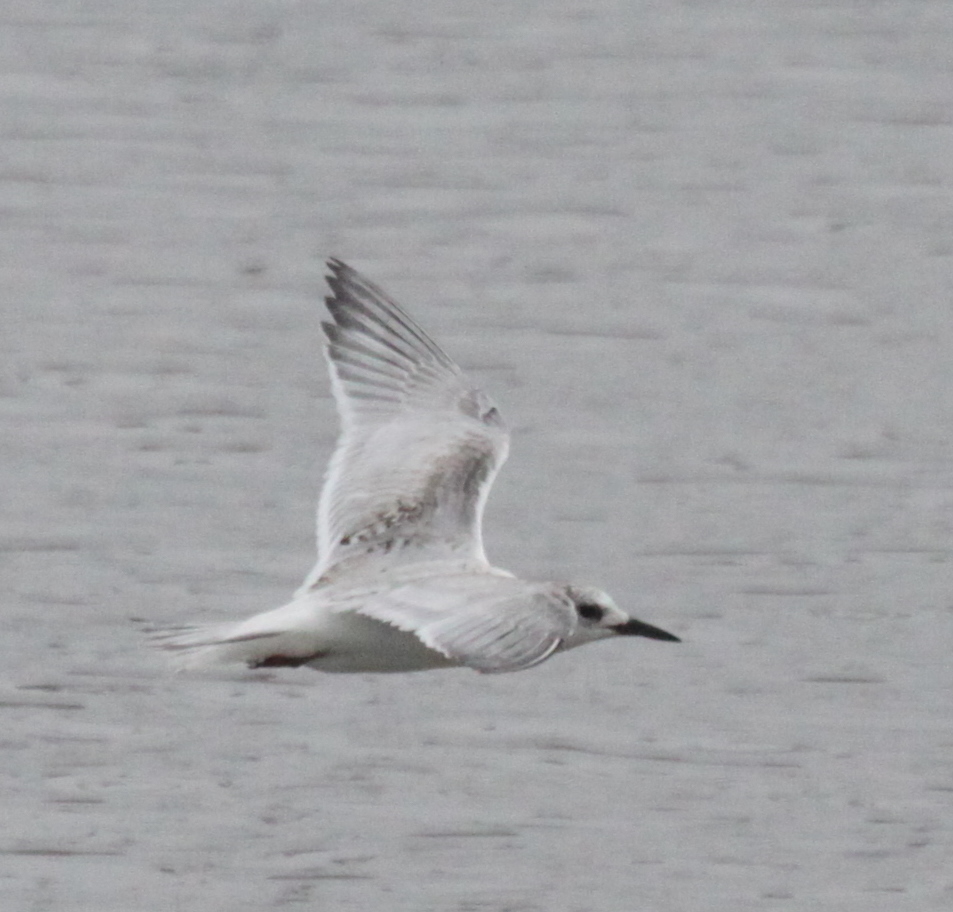 What about the Tern to the right in the first photo?

I must say this one confuses me. A couple of years ago, Dan Lane sent this photo with 3 different winter plumage terns to the Birding Peru yahoo group, arguing that South American Tern has they eye surrounded by black and that Common and Arctic Tern has “head-phones”.
My bird has both characters – eye surrounded by black and headphones. I am guessing the bird is nevertheless Common Tern, because it is November and South American Tern should still be in breeding plumage and at least have a red bill.
Again comments are appreciated.

Again I got excellent input from Alvaro Jaramillo on the Birding Peru list.

The non-South American Tern in your photos is a Common Tern. It has the classic headphones pattern, and very narrow mask around the eye. Also look at the dark marginal and lesser coverts, something that all Commons get early in the winter and often is strikingly darker than the rest of the wing. South Americans only have dark here as immatures, and it is not so dark and contrasting. I don’t recall the details, but I think some South American Terns breed in Peru, or at least used to, in winter? They may do so in northern Chile as well, but there is no proof yet. However, in terms of molt timing and appearance it is clear that there are two populations of this tern. One is a far southern summer breeder, with a classic Austral molt timing. However from Santiago, Chile on northwards there are lots of adult South American Terns which are in basic (non-breeding) plumage between November- Feb; suggesting they are breeding in winter somewhere, presumably to the north. So molt timing may not be all that useful in identifying this species, contrary to what I though and wrote in Birds of Chile.

Thanks Alvaro for the great comments. I learnt a lot! You rock!