Well, in that case this post is not for you, unless these initial reasons I am listing here can convince you to jump onboard! I have dealt with why I like twitter on previous posts and why it can also be a time-sink and seemingly a complete waste of time.  Here are some specific reasons why birders and nature bloggers should consider being on Twitter.

As soon as any of the keywords is mentioned in a tweet,  I will see  this message in my Tweetdeck search column. 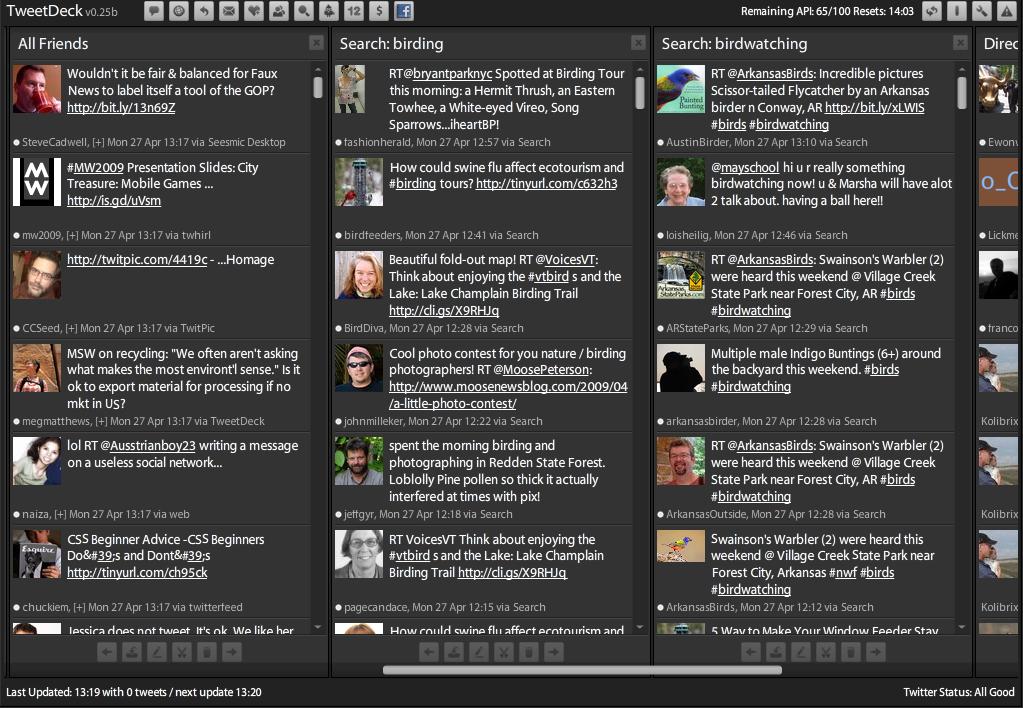 I check the last 20 posts of the twitter poster and if I think it sounds interesting enough I follow. The person I follow will get a little ping in the email saying that @kolibrix is now following. Hopefully, that person opens the link and can read my latest tweets and the short bio I have in my profile and consequently will follow back.

STOP PRESS: I just learnt about the New Seesmic desktop. A similar system as Tweetdeck but with even more possibilities. Coming any day now. If it does all it says it does I will probably move to Seesmic.

Yesterday, I cleaned up my twitter account. I used two resourses. Friend or Follow and Twitter Karma that all0ws you see who is following back.  I prefer Twitter Karma as it gives the possibility to check a few or all and bulk unfollow/follow.  I was surprised to see that I followed over 330 people without a reciprokal follow. A large proportion were people who are no longer active on Twitter. No point in keeping them of course. But also, included were a few actively twittering birdwatchers.

I find it a bit surprising that a birder does not want to be connected with another birder on Twitter, so my best guess is that it is mere negligance. After all there were some 130 people following me that I was not following back. I made life simple and erased all the people not following back. Birders will get new pings from me following shortly as I still monitor birding activity and will add active birders one by one. I am also adding people interested in conservation and travel.
To keep my part of this deal, I started to follow all that I did not follow.  I immediately got some very suspicious direct messages, so they will probably be spammers to keep away from. Those that send me spammy direct messages  or porn suggestions will be both blocked and deleted. If you want to thank someone for following, do so openly, not in a direct message.

Why should you follow back? Because the same way you want to reach out with your tweets to your followers, your followers want to reach you with their tweets. But what if you are not interested in 95% percent of the time of what they had for breakfast and what birds they saw in the backyard. Tweetdeck gives the possibility to organize the people you want to follow more closely into a column.