Since we had such a late night the previous night, we opted to go to Carpish as it is one hour drive rather than going to Unchog which is 3 hours from Huanuco. It gave us some more sleep. Thus, start at 4.30. Certainly, still felt toooooo early. Most of us were birding with closed eyes on our way to Carpish, as it was still dark anyway.

Carpish was covered in mist and bristling rain, nevertheless we went up the track by the tunnel. And we started seeing birds: Taczanowski’s (Slaty) Brush-Finch (genetically isolated form), Grass-green Tanager, Amethyst-throated Sunangel, Violet-throated Starfrontlet, Plush-cap Finch, Black-and-White Becard, Tschudi’s Tapaculo (seen well after playback), Citrine Warbler, Blue-capped Tanager etc. Particularly the Becard was a nice, because it is not a bird I see often, I believe is my first record for Carpish.

Birdwatching along the Paty Trail. 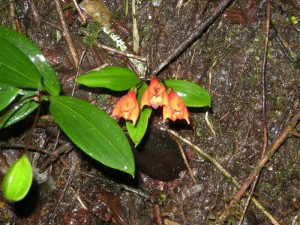 Hopping into the van again, we drove down to km51, where Doña Inez and Don Cleto lives, just next to the start of the Paty Trail. While Julio was fixing breakfast, we found some birds in a flock moving through such as Pearled Treerunner, Lachrymose Mountain-Tanager, Capped Conebill, White-tailed Tyrannulet and Streaked Tuftedcheek. Additionally we heard a Green-and-Black Fruiteater.

After our freshly brewed coffee and Julio’s special hot sandwiches with cheese and ham, we headed down the Paty trail. Just as we commenced, Aratinga-like calls were heard. I recognized that rolling drawn-out call of Golden-plumed Parakeet. A group of five. A lifer for all in our party and a very rare parrot. Luckily we got some more observations later furhter down the trail.

The mist was too dense to be able to do any digiscoping, so I have no bird ph in pootos to show you. Here are a few shots from the trail and some flowers in bloom.
More birds were added: Crimson-backed Woodpecker, Montane Woodcreeper, Long-tailed Antbird, Citrine Warbler, Russet-crowned Warbler, Gray-breasted Wood-Wren, Rufous Spinetail, Sulphur-bellied Tyrannulet, Ochraceous-breasted Flycatcher and Flame-faced Tanager. There were also Plum-crowned (Speckle-faced) Parrots and Scaly-naped Parrots flying over, but they were hard to get looks at in the mist.
Per and Lena were happy to have spotted Gray-breasted Mountain-Toucan. In fact it was Piero, Julio’s son that discovered it. Scott had a fleeting glimpse of a Masked Saltator in the bamboo on the lower part of the trail.

The Paty trail is somewhat legendary to birders in Peru. This trail was birded by Ted Parker, and he wrote an article together with John O’Neill about the birds along the trail and elsewhere in the region, that was published in Birding in 1976 (Birding (3), pp 205-216.) and the trail is still excellent. It goes from 2500m down to 1700m, but usually we just bird untill 2200m.

Community based Conservation and eco-tourism.

At the bottom is the community Ñaupamarca.  Across from the village school there is a good lek of Cock-of-the-Rock and at night the Lyre-tailed Nightjars display overhead. Rarely seen Tanagers such as Blue-browed Tanager, Golden-collared Honeycreeper and Deep-blue Flowerpiercer are also frequently seen here, so it is a shame that relatively few groups do all the way. It is my hope that in a near future it shall be possible to make programs that combine Paty trail with a trail that goes from Ñaupamarca to up to Unchog (stay tuned for tomorrow’s account). If the community claims the Carpish area as a communal reserve, they can then solicit international funding to implement a eco-trekking route and construction of some accomodation at Ñaupamarca. It would certainly become an asset for our birding trips. 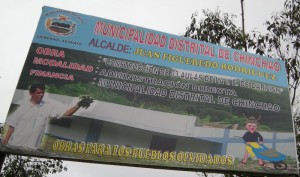 The school being built at the start of the Paty Trail will have a an area where tourist can stay, and hopefully in a near future there will also be some sort of lodging at Unchog itself. They mayor of Carpish, Juan Figueredo, recently joined Kolibri Expeditions on a trip to Mindo, Ecuador, together with 2 other farmers from Carpish, in order to see how cloud forests can become a important source for eco-tourism. Originally, we meant only to bring people from Satipo road, but in the end, after meeting with the mayor and him being so enthusiastic regarding conservation, we figured we ought to bring some people from Carpish as well. You can read about this project here, but I will also soon present a updated blog, regarding the trip. That the mayor is committed is certain. Read his opening speech  (in Spanish) at the Peruvian Congress of Ornithology, which was held just as the trip to Mindo finished.

After lunch, we walked up the road and added Andean Guan and Hooded Mountain-Tanager. Both Chestnut and Bay Antpitta were heard, but could not be lured into view.
Julio picked us up, and we drove to the dry side of the tunnel towards Huanuco to search for good Brown-flanked Tanager habitat. The bird was located in some 10 minutes after the stop and we got decent views. Also the small hummingbird Mountain Velvetbreast here.

Continuing to Huanoco we made a short stop along the road in dry habitat adding Peruvian Pygmy-Owl, Peruvian Meadowlark, White-bellied Hummingbird and Fasciated Wren, but alas not Chestnut-backed Inca-Finch, which was one of the birds that Scott really wanted to see, since he is setting up a project together with one of his students to study the Inca-Finches of Peru.
Back in Huanuco, I managed to squeeze in a run before dinner.

A confirmed trip to Satipo road and Carpish is set for May 19. There is also a short trip to Carpish that we run on request.

We had interesting discussions about collecting. A couple of weeks ago, there was a post on the Peruvian listserver Incaspiza that I manage about a student that studies birds present in tombs from the Sican culture at Tucume, Batan Grande and Sican. He wanted to set up a bird collection for reference to archeology research. I won’t get into details, as it became a debate that was somewhat heated. If you ever seen any such debate in the past, you know what I mean. However, as pro-collecting advocate in general (as long as the ethics follows rigurous protocoll), I was very surprised to learn that:

a: How come this field (archeology and birds) has not been developed yet by Museo de Historia Natural de Javier Prado, Universidad de San Marcos, that has the largest collection of birds in Peru.
b: There is no bone/skeleton collection in Peru as yet!

This was the background to the conversation and discussions the birding party from Florida University of Gainesville and University of Lund, Sweden. All in this party see the value of continued collecting to learn more about various aspects of ornithology. As the discussion went on we all agreed that not always do scientific collecting follow high standards of ethics discussed in a series excellent papers.

These are essential starting points to understand the pros about collecting and to kill some myths.

However, it is necessary to minimize the clashes with the birdwatching community, if museums want to count on some understanding from the same. The argument that the collecting is not hurting the overall population will only become valid when there is no conflict of interest. Scientific collecting can not count on support if insisting in collecting in the same areas as the birdwatchers frequent or if they take specimens of critically threatened or endangered birds, when it isn’t necessary. Birdwatchers will not understand any reasoning behind taking a series 15 threatened petrels of the same species off the North American coast or the reasoning behind having to have voucher specimens for every species in Peru, especially if it is a threatened species, when a photograph or a recording suffice for a publication.

A sound starting point for collecting ethics would be the following guidelines.

Feel free to comment. Starting point. How to build bridges between birdwatchers and professional ornithologists?