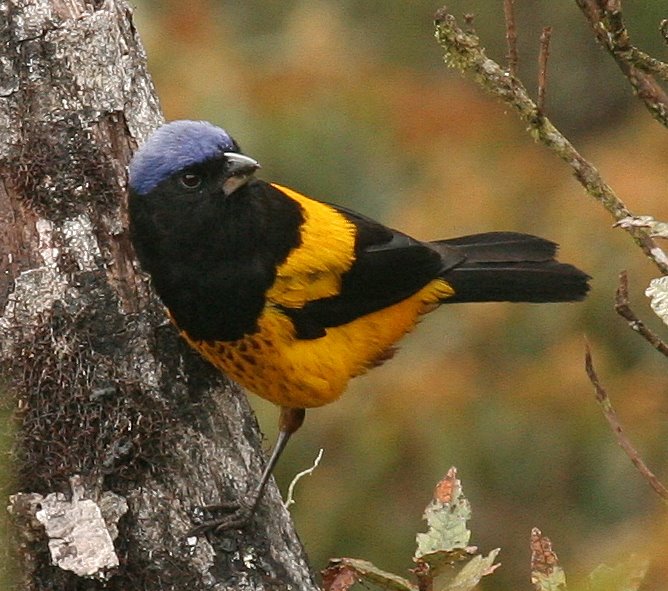 Wednesday Jan 7, 2009.
Its not every birding day on our itinerary that has a 2.30 AM start, but to visit Unchog in just one day and have decent go at the Golden-backed Mountain-Tanager and the Rufous-browed Hemispingus in the rainy season and not to have to camp, does require extreme measures.

We had plenty of time on our hands to get to the start of the trail beyond the small village of Cochabamba and it turned out we needed all that time, due to delays in the morning and sliding off the track with one wheel and pushing the van back up again.  The road up to Unchog can be very slippery. Fortunately, the locals had done good maintenance and we got to our final destination – the end of the road – around 5.15 and it was still dark. Julio prepared breakfast and we had a good bowl of fruit salad, yogurt and granola, as well as freshly French pressed coffee from Alto Mayo in Northern Peru, before we started walking.  We had a gentle 50 meter rise, and then a 300m drop to get into prime habitat. On the way we saw Plenge’s Thistletail, and Many-striped Canastero. Sedge Wrens and Neblina Tapaculo were singing.
We reached “Hemispingus bend” just as a flock was forming with Pearled Treerunner, White-throated Tyrannulet, Citrine Warbler and the endemic Pardusco (one of the Carpish endemics), and almost immediately Andy Kratter stuttered, 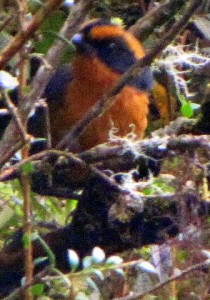 “Ttheerre it is. The, the , the Hemispingus” as I was pointing out a beautiful Golden-collared Tanager. “Rufous-browed Hemispingus” he yelled to the others some 20-30 meters behind us. Everyone got brilliant views and Andy even got some pictures. This is a bird many groups often miss. Excellent start!
Reyes had continued down the trail to be on the lookout for GBMT. We soon caught up and stood looking out over a stunning forest and the sun playing with the canopy as the forest was warming up. We had probably not stood there for more than 20 minutes, when I saw some movement in a tree only some 20 meters in front of me. Now it was my time to stutter. Golden-backed Mountain-Tanager. Everyone except Per Lundberg stood close and had great views. Per came rushing in from 50 meters down the trail and eventually also got good views.

It was only 8.15 and we had already seen the two most wanted birds on the trip.

The rest of the morning produced relatively few new birds. Some heard included Undulated Antpitta,  Obscure Rufous Antpitta (obscura form) and Tchudi’s Tapaculo. One of my best birds was a cooperative White-browed Spinetail. A bird I have seen only in Southern Ecuador and now a Peru tick!

We even managed to get some exercise. The 300m uphill got the heart beating. Julio had already prepared lunch. Spaguetti bolognaise. Uneventful, trip back to Huanuco and we continued to Junin via a stop en route for Brown-backed Inca-Finch, which was seen very well. Additionally, Black-crested Tit-Tyrant was seen briefly by myself.
In Junin at 4100m we stayed at a basic hotel and went out for a meal. In spite of the restaurant looking modest, the food was very tasty. I had trout.

When birding with prominent North American ornithologists, who mostly use the scientific names as first choice, English bird names soon become a great topic for discussion. If “collecting” get lots of opinions (see the last posting) from birders and ornithologists alike, English birdnames give even more opinions. “Stability” is used as the number one argument in many cases favoring not to change a name, but in other cases “improvements” are necessary because the current name is “no good”. In many cases it gets very subjective. And to whom shall we (the public, the birders and the rest of the ornithologists) give mandate, to select the best set of names. No matter who does the job, there will always be discontent.
In recent years there has been some attempts to synchronize. International Ornithology Congress (IOC) has pointed a commission to standardize English bird names. This lead to the publication of “Birds of the World. Recommended English names” in 2006 by Frank Gil and Minturn Wright. The full list constantly revised and updated as new species are described or split can be found on  https://www.worldbirdnames.org/. IOC takes on English birdnames – this got be the right course to take. Not surprisingly, not all want to accept the international standardization. Notably, AOU with the two committees North American Checklist Committee (NACC) and South American Checklist Committee (SACC), has their own set of rules and many is some cases have different English names than those suggested by IOC. NACC took a vote to adopt IOC:s suggested changes of names of North American birds, but since the list also included spelling and hyphenation differences, all the changes were turned down in bulk.

The most eye-catching or (ear-catching) hard to swallow names and to take to tounge are the Myioborus White/Redstarts.  SACC insists on Redstart, while IOC favors Whitestart. “Start” is a germanic word meaning tail (also in old English). Anyone can see that the Myioborus have no red in its tail what so ever. It is the Painted Redstart, that occur in almost every North American birdbook with this same name, that makes so difficult for the Americans to accept the logical name-change. This has become a personal rant issue of mine – so beware before you klick on the link to put down your vote for your preference. Whitestart or Redstart?. Don’t take it too serious. It is just for fun! SACC is unjustly picked on. SACC has put forward Neotropical Ornithology light years by putting down a baseline for taxonomy and un-doubted distribution. However, maybe putting English names could be best appointed to the IOC committee especially formed for this purpose.
Andy Kratter is on the North American Checklist committee and was the only one who favored whitestart when NACC took a vote on whitestart/redstart. Andy, you are a hero!

There are a few other interesting cases. Northern Chestnut-tailed Antbird was described as such by the Islers and Whitney and favored by IOC, but SACC changed it to Zimmer’s Antbird. Why? Because a dominant number of the members of SACC do not like compound name with long geographic epitets. But geography can acutally be much more informative than combination of color and body parts of cryptic species with hardly no such difference or naming the bird after a person. In spite of SACCs decission I don’t think anyone has yet wanted to change the names of Northern/Southern Rough-winged Swallow or Northern/Southern Beardless Tyrannulet. Want to vote on this as well?

Another favorite case of mine is Lulu’s/Johnson’s Tody-Tyrant. In spite of normally favoring stability, SACC renamed this cute bird endemic to Peru, that already had a name both in the formal description as well as the published Birds of Peru by Clements and Shany. Surely Lulu is more catchy than Johnson. Vote here!