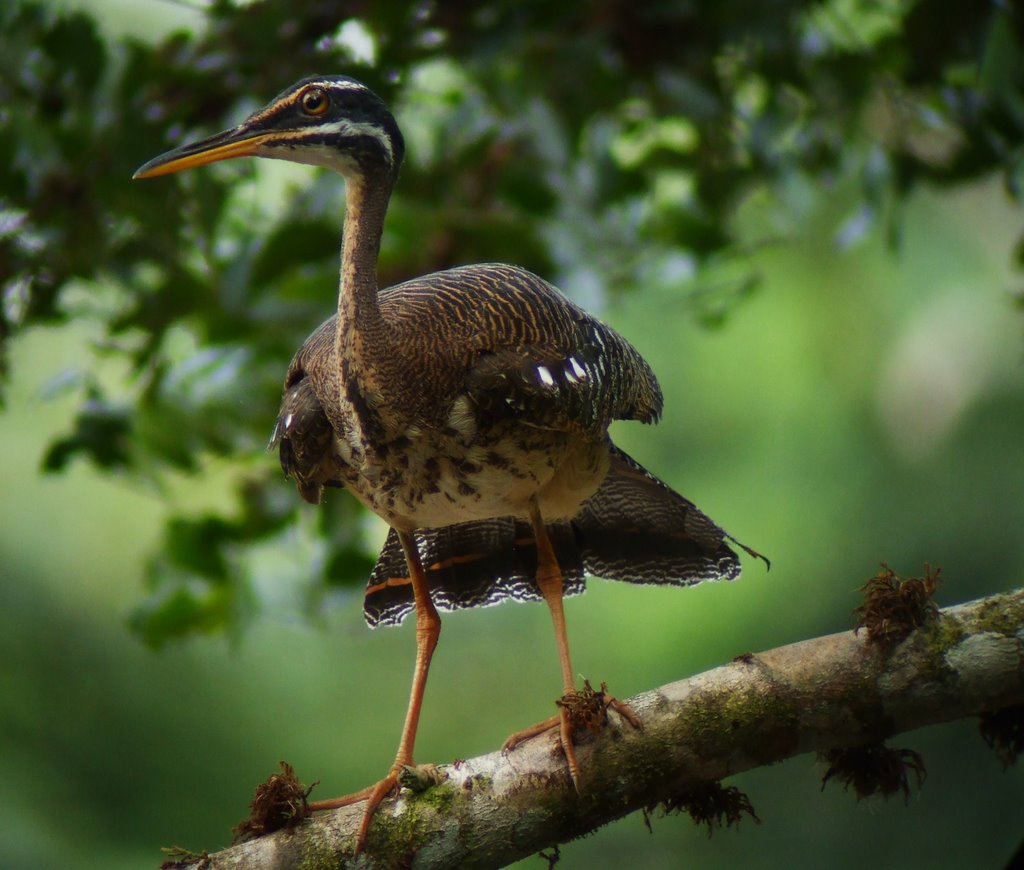 Sunbittern is one of the birds that is easily seen at the new Lodge that is being built near Puerto Maldonado. Photo: Alex Durand

Sometimes one has to make a change of plan. A great idea needs to be modified because the external conditions have changed. The initial conditions two years ago was that the communities of Amarakaeri  reserve had four lodges spread out along the eco-touristy fluvial route down the Alto Madre de Dios river to the Blanquillo area and the spectacular Macaw-clay lick, Giant Otter lake , the Tapir clay-lick and 12 species of monkeys. This is the heart of the wild Manu at the edge of Manu National Park and the richest, most bio-diverse place on earth. Finally, the indigenous communities had the means of getting their piece of the cake of the lucrative eco-tourism industry. Had they really?

I was invited to fam trip (“fam” is tour operator lingo for familiarizing trip) by the community company Wanamei two years ago and it became very clear already on that tour that the communities would not be very prepared to run the lodges with all the logistics involved. They needed a commercial partner. Kolibri Expeditions had sustained talks with Wanamei about starting to market the route to birders.  Many birders are prepared to take some logistical deficiencies, as long as the birding yield is great. This way the communities would slowly get into the operation and do it well.

To market the product I organized a big give-away of one free trip per departure to prominent bird bloggers as well as Twitter and Facebook users, who would help spreading the word on Social Media platforms. We also offered a pretrip to young birders at a much reduced price – with the idea that young birders would be even more resilient to logistical problems as long as they saw the birds.

So far, in theory, this looked interesting and feasible as well as a novel marketing approach. We just finished the first two trips in May. One Young Birder trip on May 17 and the first regular departure for bloggers with Bill Lynch as host on May 23.  The coming hosts and takers of these trips are of course curious to know how it went and what was seen, why I will deal with this below.|

I shall principally deal with the logistics here. The birding result from the trip shall be seen on the Facebooks, blogs and Flickr accounts of the participants.

Here are the names of the participants of each group and their Facebook and Flickr accounts. For Facebook you will need to be friends with them to see the photos and walls.

Maybe I have not been all that clear but running a rain forest lodge is a logistical nightmare, especially in the Manu area. Supplies can only be brought in by truck/air and boat. It is expensive. Contact with outer world (Cusco) is via short-wave radio with a minor obstacle in between – the Andes! Reception is often very poor and it may be days before a message can actually come across. Furthermore, everyone else (the competion and the rivals) will hear about your logistic deficiencies (more common than organization). Some of the more renowned lodges have put in Satellite Telephone/Internet services which of course is the solution to connectivity problems. But in order to afford the service there is a need of a continuous stream of visitors. It’s a Catch-22.

When you put indigenous community into the equation there is yet another factor. Community in the Amazon doosn’t exist. The communities we see today are families lumped together by the church or the  geo-political “progress”.  We need your oil, Indian!

In reality, the natives in the amazon are grouped by their kin. Their family or the clan is what is important. This is a major factor why community projects imposed from the outside rarely are successful.

End of the Manu road. Worked well. This lodge has been in used almost continuously for two years and the community now has some experience of managing it. The birding is very good along the roadside and at the lodge itself. We only stayed one night here, but may opt to two nights in the future.

Situated on the other side of a river island. The river arm next to the lodge has been cut off, so it was hard to get there.  Time was wasted on the first Young birder trip and the second trip did not even try. A nearby budget lodge called Yanayacu was used instead. They were a bit unprepared for our arrival but did provide showers and beds with mosquito netting.

The toilet had a huge Tarrantula nesting, which maybe is not the kind of jungle experience the clients want.

I am sad to learn that this lodge could not be used at all. I was very impressed by the birding here two years ago and our guide Alex Durand praised the place with great birds that included Elusive Antpitta.
The trail was overgrown now and hard work. The young birders did see some good birds here, but the boat staff headed on the lodge area to see it was totally deserted without beds. The first group decided to head on to Blanco Lodge and the second group did not bother to even try.

This is the key lodge in the system of lodges as it is very close to macaw clay lick and the Giant Otter lake of Cocha Blanco. Furthermore there is a tower nearby overlooking the small Cocha Nueva lake. We knew in before hand that the water supply to the lodge was not working, as all the tubing was broken. When the lodge was build all the PVC tubes were not laid in deep trenches but too close to the ground, why people later have trod on them resulting in smashed tubes.

The cabins and the main dining-hall/kitchen building were infested by termites. While the young birders found that quite fascinating, it was not at all appreciated by Bill Lynch’s group. The mosquito nets were not present with the first group, while some mosquito nets were arranged by the boatmen of the second group.

After hearing of some of the problems of the first group, I made arrangements to let second group to come back via Amazonia Lodge at the bottom of Manu road. While this was appreciated and added many good observations it also lead to more travel time. Furthermore, Bill Lynch’s group had bad luck with the weather. A Patagonian cold front known as friaje was present during most of their trio, which lowered the general birding activity. The Young birder group were lucky with a massive Army Antswarm at Blanco which positively added to their experience. Both groups saw Giant Otter and visited the Macaw Lick. The macaws at the macaw lick never came to the mud wall to digest the clay, but kept flying around perching on nearby brances.

All this show that there are severe problems operating this trip, and frankly I don’t think it is worth our while, if the lodges are not accessible and improved. We thought we were going to be able to arrive some agreement with community company Wanamei, who managed the set-up, however some of the individual communities are no longer interested in having Wanamei as operator and prefer to make a deal directly with individual companies.  This makes our participation as lodge operators more difficult as we wanted to operate a network of lodges. It is no problem of buy the services of another operator though once they get strarted, but to me it seems likely that CMT and Charro are decaying even more as they are less attractive for non-birders. Blanco can possibly be turned around because of its strategic position, but it will take some while before it is offered to the public and as good or better than other nearby more basic options.

Another complaint was that was that the transport sections were too long. The lodges lying between  Shintuya and Blanco was too log without CMT and Charro as stepping stone. Too much time is lost in a program as short as only 8 days if the lodges are too far in between. In any case, I shall have to make it clear in the programs that there is a lot of travel.

We still have many booked trips for the community programs, why I must find alternatives for these.  The costs of the Manu program with alternative lodges will simply become too expensive, especially if the group size is less than 7 people. What further make it difficult to operate within the budget I originally set for the trips, is the fact that the flight prices for foreigners with LAN have increased since last year, and the alternative airline to Puerto Maldonado – Star Peru – does not give return prices for open jaw routes.

Suddenly the perfect alternative emerged from nowhere, solving many issues of the deficient community program. The brothers of Kolibri Expeditions’s top guide Alex Durand are building a lodge in vicinity of the Infierno community near Puerto Maldonado. This is just a stone’s throw away from the more famous Posada Amazonas, with access to Giant Otter lake and macaw lick by 30 minutes of boat on the Tambopatata .  Right now it is more of a camp than a lodge, although cabins are being built. Having said this, they have a dining room and kitchen, toilets and showers, and a platform with beds and mosquito netting. The Young birders spent two nights here and the report the trail system was excellent. Alex Duran made a 3 day recce to check what birds are there and compiled a birdlist of 370 species. Birdwise there is no difference to Manu.  There is good bamboo at the lodge with all the specialist birds. The main advantage with Manu is Tapir and the large number of monkeys. You will see monkeys in Tambopata as well, but there will be fewer species.

Purus Jacamar is an uncommon Jacamar of flooded forest, which is difficult to get in Manu but easier in near Puerto Maldonado.

Overall, we solve several issues with the community program this way. Let’s list the advantages.

Here is the new 9 day  program that we shall run in August replacing the community program while the condtions are not great. It has one extra day added to sample the cloud forest more amply. For other programs we shall run the same program over just 8 days. Young birders up to 25 years old have a special price of $699 for 8 days trip (airfare and Lima day not included) and $609 for 7 days (later programs) .

Links to previous posts with background about the Amarakaeri Manu community lodges: