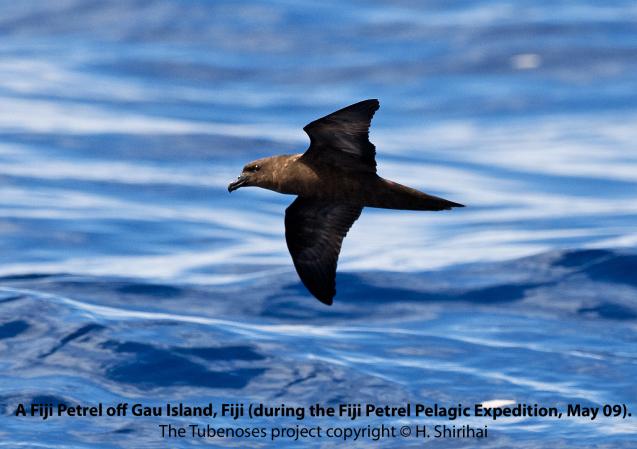 I am pleased to announce a short interview with the main players of the recent discovery at sea of Fiji Petrel that I reported last week.  Both Had0ram Shirihai and Tony Pym have kindly answered my questions. I meant to send this earlier, but had to leave for Cuzco for a few days.
If you have additional questions to ask Hadoram and Tony, please put them in the comment field and I will forward them.

In November 2007  Hadoram Shirihai re-discovered and photographed Beck’s Petrel in the Bismark Archipelago.  Again, he is the main executor of a new major seabird discovery as the news and photos of  Fiji Petrel circulated around the world  yesterday. He has an impressive track record of excellent, very thorough and well researched books already published, such as being author or co-author of major birding literature such as Birds of Israel

.
In the mid 90’s he started getting more focused on seabirds his extensive travels in the southern seas culminated with the definite reference and guide book for Antarctica and the seabirds in the vicinity with the publication of The complete guide to Antartic wildlife

in 2001 with a revised and extended second edition 2008. His travels over the seven seas also resulted in an authoritative guide for marine mammals: Whales, Dolphins, and Other Marine Mammals of the World (Princeton Field Guides)

Hadoram has several on-going book project such as Photographic Handbook for Western Palearctic Birds with Lars Svensson, Photographic Handbook of Birds of the World with Hans Jörnvall for which Hadoram himself has to provide around 5000 species  and the definite work on seabirds that all seabird fanatics are waiting for The Tubenose project. It is this latest project that drives Hadoram to make these far-flung expeditions to search for and photograph seabirds rarely or never previously photographed.

The natural question for seabird “locos” like myself. When is the book coming out, Hadoram?

It probably will be ready for publication in 3 to 4 years, depending when John Cox will end his great plates, but in the meantime Vincent Bretagnolle (my co-author) and I are working on the text, more photo/chumming expeditions and on publication of c. 10 scientific papers… Good books takes time to make, you have to wait if you want a good one… Tony will be happy to answer your other questions.  I am on my way to Brazil…

Hadoram native of Jerusalem, Israel, travels for around 5-6 months per year for his book projects and nowadays calls Zurich, Switzerland his home is coming to Peru next year to continue his photographic work for the Photographic Handbook of the Birds of the World. Kolibri Expeditions is getting the privilege to make all the logistical set-ups.

Tony Pym is senior guide for Ornitholidays and guide many of their pelagic cruises. He is well renowned among pelagic birders and shares a lot of his sightings and news on the list servers  specialized on pelagics. He also has an excellent web-page on Seabirds and Cetaceans. Since Hadoram is travelling Tony kindly answered my remaining questions.
After the aborted expedition in 2008, how sure were you that you were to try again?

After the problems in 2008, if anything this made us more determined to get back to the area. In fact, there were many more problems than solely mechanical problems with the boat but these are for a future chat, not publication! It was very frustrating for us after much planning to be leaving the South Pacific last year, seeing such good birds in the few days and believing the Fiji Petrel was there, somewhere waiting to be seen. After much discussion between the team we decided on a different timing, the dates being co-ordinated between us with particular reference to the possible breeding season. The paper outlines much more about this and the reasons for working given sea areas.

Was it hard to get paying members to the two expeditions in 2008 and 2009?
There are few amateur seabird enthusiasts who wish to be at sea continuously searching for petrels, and have the money also for the travel and real costs. We needed this money up-front also, so that the boat could be charted and other accommodation/logistics put into place in advance of our arrival. The cost was equally shared, with hopes of some refunds from both company and private support, including that from the main conservation societies (listed in the scientific paper).

How did you manage to keep quiet since May and why?
The team agreed an embargo; to not release any photos or information from seeing the first bird to actual publication of the paper. Everyone had to keep to this for maximum impact on a given date (that day was 11 September). Any release of a photo could take away from both the paper and the announcement.

Was there any particular reason why the announcement comes with the publication?
The BOC agreed that the paper was of sufficient importance for its next issue, as we wanted. From May we had to write the paper – 20 pages has been published – with a deadline for publication in the next bulletin, September. We agreed with the editor that the bulletin, with its scoop, had to be mailed and on subscribers’ doorsteps before we released the press announcement. This was agreed with BirdLife also, and the embargo date agreed was yesterday. On the same day, any postings to Newsgroups, other media could take place. This would give maximum take on the plight of the bird, in the world’s press, resulting in many thousands seeing the photos and notes on the same day. This method meant the likes of BBC, USA-Today, Sky News, AOL and newspapers like the Guardian, Daily Telegraph and other big players in new wires would all have the info at once. Also, we had here the opportunity to advertise the BOC, BirdLife, NatureFiji and others in one big hit.

The dark small cockilaria like petrel that got away in 2008. Was it IT? Did Patrick, Geoff and Dick Newell see that one well enough to stay at home this time?
Yes, the small dark petrel could have been the bird, but it was seen only by Hadoram, Jörg and myself. The others did not pick up the bird as it came in at distance, disappeared behind a wave and shot out the other way. So, Geoff, Patric and Dick Newell have not seen Fiji Petrel…unfortunately for them, after their efforts in 2008.

Last question: So what is next? Any other lost species you are going to search for? How do I sign up?
As for future expeditions we are planning at least three more at present, but you’ll have to wait for their announcements within the seabirding community. Suffice to say, all involve very rare seabirds….and the world is a big place!