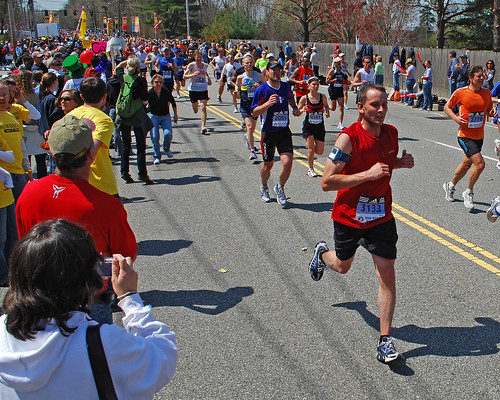 In this blogpost I shall not speak a of birds at all. So if you are a birder, with absolutely no interest in the physiology of a marathon race, leave now and come back next week, when I shall be blogging about birds again. If you have done your homework (that is reading my previous blogposts), you’d know I am about to run a Marathon on Sunday to raise money for conservation of cloud forests near Satipo in Central Peru. If you have not been so diligent, check out that post and make your pledge to support me and the forests near Satipo. Most of the information in this book is in one way or another derived from the brilliant science based Lore of Running

by Tim Noakes, MD. Dr. Noakes presents a scientific approach to running and explains the physiological processes in the muscles, blood stream and respiratory system. Not only that, it treats psychology, training, training, injuries, running for women etc. It is a bible of over 900 pages! Other books on running have borrowed much of explaining physiology from this book. Highly recommended!

A bit of history

As you probably know, the distance between Marathon and Athens in Greece is approximately 25 miles and Greek legend lies as the base to what today is known as Marathon.

The name marathon comes from the legend of Pheidippides, a Greek messenger. The legend states that he was sent from the town of Marathon to Athens to announce that the Persians had been defeated in the Battle of Marathon. It is said that he ran the entire distance without stopping and burst into the assembly, exclaiming “Νενικήκαμεν” (Nenikékamen, ‘We have won.’) before collapsing and dying. – From Wikipedia.

For the Olympics in London 1 mile was added with royal permission to make an undisturbed start along the Long Walk avenue leading to Winsdor Castle. To accommodate the Queen (Alexandra, wife of Edward) to get a splendid view of the finish of the marathon 385 yards on the track on the Olympic Stadium at Shepard’s Bush in London was added. The fixed distance of the Marathon 26 miles 385 yards (42.195 km) was set from this day, even if there were to be some variations in the next coming Olympics until settled onwards from 1924.

Anyone can run half a marathon, but what is so special about the full distance? You burn close to 3000 kcal during a marathon. Most of the energy used is stored as glycogen in the liver and in the muscles. The glycogen in the liver breaks down simple sugars to feed the brain and the glycogen in the muscles is used by the muscles supplemented by simple sugars and free fatty acids in the blood stream. Normal storage is around 1500 kcal worth of glycogen. But with training and diet it can be raised to over 2000 kcal. Unless, you train for a marathon you will run out of glycogen and the last part of the race the body starts to rely completely on burning fat. Since the fat is more complex in structure it is also not as accessible as an energy source. The result is that you have to slow down and you hit the famous wall.

While you train, and especially after doing long runs that depletes the glycogen stores, your body gets used to replacing the glycogen fast and little by little make you better and better prepares. During the last week before the marathon it is a good idea to slow down intensity in training to fool the body to keep on storing glycogen – just in case. Doing a good job at it, eating carbohydrate rich food (70-80% of the diet), the glycogen deposits can increase to about 2500 kcal. This is the reason why marathoners eat copious amounts of spaghetti prior to the race.

On raceday however consuming a lot of carbohydrates just before the race will increase sugar in the blood stream and immediately set off an insulin release that will lower counter the high sugar content and make it more difficult to metabolize the energy. So any additional energy consumed on raceday ought to be taken around 4 hours before the race. Great! The race on Sunday start at 7 AM. I am really looking forward to a 3AM breakfast! Not!

The funny thing is that actually eating something very fatty an hour or so before the marathon will actually raise free fatty acid levels in the blood stream, which would serve as energy delaying the breakdown of the stored glycogen,which will this way be preserved for later in the race. I am not going to try to eat anything greasy sleazy before this Marathon because I don’t know how I will react, and should have tried this during my training if I had read up on physiology of running.

Another more normal way to increase free fatty acid levels in the blood stream, is taking caffeine. Caffeine is not permitted in large dosis, but normal coffee intake is fine and within the allowed limits. Peak values set in after 1 hour and remains up to 4 hours. It should only be tried if you are used to caffeine. As a keen coffee drinker, I should have no problem. I plan to drink coffee instead of sportdrink half an hour before the race. Best to drink it without sugar since the sugar would delay the effect.

Hydration during the race.

A normal person would lose 1 liter per hour in the race by sweating. In a four hour race he would lose four liters. Fortunately, he does not have to drink 4 liters to compensate, since the breakdown of glycogen to glucose releases as much as 2 liters of water during the same time. With a water-hole every 4 km it means that I should aim to drink 200 ml at each station to get enough if I run at a 6min/km pace. Grab two cups! It is hard to drink in fast speed from plastic cups, so if friends can help out providing liquid in plastic bottles instead that helps. (Volunteers…please speak up!).

What should you drink?

Water and Powerade is supplied. Unfortunately and contrary to belief, taking sugar during the race, will not prevent from depleting the glycogen stores in the leg muscles. The stores are consumed at a steady pace. When they are gone they are gone -and that is when you find the wall. You will have to slow down.
But the sugar does prevent glycogen depletion of the liver. So at least your head shall remain clear and you will not faint if you consume carbohydrates during the race.
There is only so much sugar you will be able to absorb. Some people have trouble absorbing the liquid if it contains too much sugar. To drink sportdrinks during the training makes it easier to absorb during the race. Some people should stick to water and occasional powergels or dilute the sport drink. But don’t wash down your Powergels with Powerade. It will not work. The liquid will not be absorbed and it will cause trouble during the race.

The combination of losing too much water, too hot climate and too fast speed makes overheating a serious risk in Marathon running. Climate and speed are the most important factors. In Lima there should be little risk, since the cold season has set in. Most likely temperature will be slightly below 20ºC (68ºF) and maybe some coastal fog. The race provides free T-shirts in synthetic breathable material. This is good. It is not a good idea to wear a cotton T-shirt. The sweat produced during running is supposed to cool down the body which happens when it evaporates from the body. A sweaty T-shirt could prevent the cooling process.
Overheating forces you to slow down. If the temperature in the air is above 23ºC you will have to run slower.

This is how my day looks like on Saturday-Sunday.

Saturday: 9 PM bedtime!
Sunday: 3 AM. wake-up and immediate breakfast. Probably do peanut butter sandwiches in hope of having some free fatty acids in the blood by the time the race starts. Coffee. Two glasses of water.
3:30-5.00. More rest.
5.50 take taxi to Race start at “Pentagonito” in San Borja. It is close to here – only 5K, but I don’t want to waste energy if I don’t have to.
6.10-6.40 some stretching a bit of warm-up.
6:40 Coffee. Toilet
7 AM Start.
The first part of the race is mainly downhill (110 meter drop from km 4), the second part has to gain 80m back to Pentagonito. I will drink Poweraid throughout. At km 30 I will have some coffee, that I will carry with me.
At control 36.5K I hope to have someone handing me a bottle with 300ml Powerade and will run with the bottle sipping up to 39K. This way I can skip the last control at 40K which is too close to the finish to have any effect on performance. I ran the last 12k of the race course last Sunday as dress rehearsal. I think this will be very important to mentally be able to finish in good form.

I shall be tweeting every 10k with hashtag #Lima42K, so you see how I am doing. Follow me on Twitter. If you are in Lima come out on the streets and cheer.

Next Post: Lima Marathon finished in 3:59. How to donate?