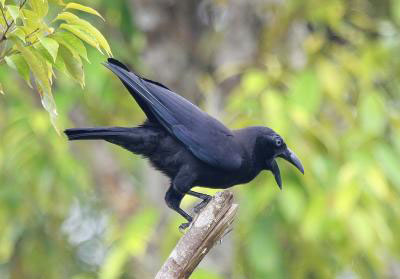 It is fascinating that new discoveries are made in this day and age in the ornithological world. An article published today in Life Sciences as well as adiscussion on BirdForum confirms that Pamela C. Rasmussen at Michigan State University has verified that the specimens and photographs taken by local biologist Mohamad Indrawan in 2007/8 on the Indonesian island Peleng are indeed the critically threatened Banggai Crow which was lost since 1900.  It has made public and official only today, because it had to be confirmed that there was no confusion with the more common all black subspecies of Slender-billed Crow (Corvus enca).

The morphometric analysis I did shows that all four unicolor specimens are very similar to each other, and distinctly different from enca specimens. We also showed that the two taxa differ in eye color — an important feature in Corvus. Not only did this confirm the identity of the new specimens but also the specific distinctness of Corvus unicolor, which has long been in doubt.

Mohamad Indrawan, now concentrates on conservation of the species and its habitat. He calculates the population to be around 500 birds. Maybe birding tourism could help. Anyone want to go? Kolibri Expeditions forthcoming tours will also include Asian destinations!

Rasmussen, who also is assistant curator of mammalogy and ornithology at the MSU Museum, is the author of the two-volume Birds of South Asia: The Ripley Guide. Her work on uncovering the ornithological frauds of British collector Col. Richard Meinertzhagen won international attention, detailed in Nature, the May 2006 The New Yorker, and The Best American Science and Nature Writing 2007.