In a marathon everyone is a winner. 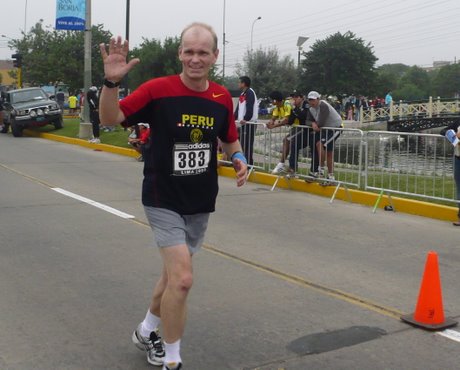 I have had a long rest this week, both from running and blogging. I’ve done some birding and I spent a lot of time with the family.
I had started on a blogpost describing the race and meant to finish it earlier. One week later I am concluding this post. Hope not to bore you with yet another running blog. I will be birding this coming week, so I promise my next post will have some birds in it. Deal?

The morning before the Marathon

Before the race I posted a blogpost on the physiology of a Marathon, where I summarized Dr Paul Noakes notes on the subject. With my five and a half weeks of training, it was really quite unlikely that I would be able to store enough glycogen in the muscles to last me the whole race. The long runs are the key of marathon training. It teaches the body both to store more glycogen in the muscles as well as burning fat. “Lore about Running” had some interesting conclusions. The energy you consume during the race such as sport drinks and energy gels, can not be used by the muscles in the legs, only supply energy to the brain. However, when fat is used as energy by the muscles this is in the form of free fatty acids in the blood stream. Consequently, if the levels of free fatty acids can be increased in the blood stream, then the glycogen stores in the muscles would be saved for later. Noakes mentioned two ways of increasing the free fatty acids. Caffeine and/or a greasy meal before the marathon! The later must be as much a surprise to you as it was to me. Fat for breakfast? Noakes recommends a fat meal to be ingested 3-5 hours before the race. If you think of it, it makes sense. In the old days, people working on the farms, what would they have to breakfast? Granola, skim-milk and lean fiber rich bread? No, they’d have bacon and eggs fried in large amounts of grease, and this would give them the necessary energy for hard labour.

I had said in the blogpost that I wasn’t going to try this without any prior testing, but in the end my curiosity gave in as the confidence in efficient carbohydrate loading diminished. I had fried red bell-peppers in abundant virgin olive oil the night before the race and I got up at 3AM to fry tomatoes and an egg, which I had for breakfast with bread.

Coffee was my choice of caffeine, as I drink it regularly. I was considering using energy drinks as caffeine source, but Noakes said the sugar would make effect of the caffeine delay the release of fatty acids. A fast cup in the morning and then back to bed to try to get some more sleep. I put the alarm on 5:30. I did not sleep much, but the rest was good. Shower, clip toe-nails, baby cream (thanks Luciana) smeared at underwear linings on top of inner thighs, taped the nipples with plasters and surgical tape (any discomfort during the race has two be multiplied with 42 kilometers and 4 hours of discomfort – bleeding nipples are not unusual for the men – ladies are saved by the bra), race-clothes on, new soft socks, sweatband on one hand and another in my carry pouch. A last visit to the toilet produced nothing solid. Not to worry, toilets also available at the start.
The carry pouch also had my blackberry to tweet the messages along the race and two plastic containers with coffee. One coffee was gulped down in the taxi. The day was overcast and around 18 degrees Celsius, which was very good conditions for a marathon. I located the toilets, and remembered I had forgotten to bring toilet paper!
Oh no!

But there was a lady giving out toilet paper, so that was a good sign that the race was going to be well organized. No need to go into details……..but it did not feel as my bowel was completely empty afterwards.

The route and the contour of Lima Marathon

Above is the route of the Marathon. Here follows elevation chart.

There is a brutal rise in the last half of race. Especially a 80 meter ascend the last 7 km.  Lima may look flat at first look, but it is a long slope really. There is 120m elevational difference in the course.  In short a long downhill the first half and a very loooong uphill the second part.

The fatal start. Injury after only 700m 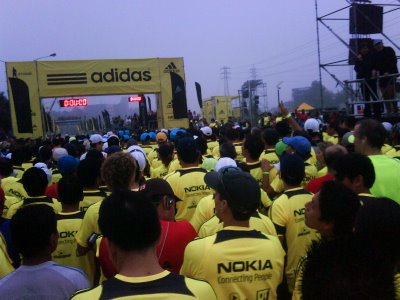 It was crowded but I found a good spot not too far back in the long row. Start went off and it took me about 15-20 seconds to cross the start line. It wasn’t to crowded, some pushing, but nothing serious really. It felt good to start with, but I remembered I had not double knotted my shoes. This got me somewhat concerned. In the immediate reports I was saying that I got hurt at 1.5km, but when I look at the GPS position for the Garmin Forerunner 405 on Google Earth, it turns out I had only run 700m, when I started feeling a tight pain from the inside of my left thigh. I didn’t do a sudden movement or anything, all of a sudden the strained muscle was just there and it impaired the running to a strange limp. A kilometer later I had to stop.

Re-tying my shoes and a bit of stretch, I realize that the pain will not go away and I still had 40Km to run. At this point I didn’t think I could continue. But I thought about the quest to raise money and that it would be too embarrassing not to fulfil the marathon. I went on. At 3K my friend Juan Liziola past me. We were suppose to run together and pep each other, but now I couldn’t keep up the pace. I was running very slowly.

Through the race I tried to send Twitter messages. They were all attached with a pre-recorded plead. “Marathon for Conservation on hashtag #Lima42GE Make pledges on https://is.gd/KkUm“. I made some typo’s, why the value of this intent was not as good as I had intended…but nevertheless it kept me busy.

To let you know how my marathon looked like via Twitter, here is my twitter stream since I got up last Sunday. Start was set at 7 AM:

Apart from the two stops I did for obvious reasons, I never stopped running. A big mistake many runners do in the end of the race is that they loose the posture and start hunching forward. This is a very ineffective way to run. As can be seen from the photo, my running style is not pretty. I don’t lift my knees much. But this shuffle is also very energy conservative.

I hope to be able to keep on training to run New York Marathon on Nov 1. I have 21 weeks to get in shape. I also have 21 weeks to think of excuses, if I don’t make sub 3:30 in that race. I should be able to do it if I can keep up the pace. The only way to get prepared is to put down the kilometers. I have chosen to follow a program that gradually increase mileage from around 50km/week to about 90km per week. There are four cycles to follow. Endurance, lactate threshold training, race-training and taper prior to the marathon. During the first 9 weeks, I shall concentrate in building strength increasing mileage, doing core-training and strengthen hams and quadriceps with weights. Then follows 5 weeks of getting the body accustomed to maintaining higher speed through intervals or speed sessions. The race-training follows with four weeks with some specific training at Marathon speed and some shorter races. The last 3 weeks before the Marathon is less intense and with less mileage, so that the body recovers fully before the marathon to reap the benefits of the hard training on race day. With this proper training it shall be interesting to see how much I would lower my overall time. I need 3:30 to qualify for Boston Marathon in late April 2010.

If you wonder how you feel after a marathon. Check this video. It says it all. You can spot a Marathon hero from a mile away.

If you liked this here are some related posts.

Previous Post: Lima Marathon finished in 3:59. How to donate?