Who the hell is Guy Kawasaki? Does he sell motorcycles?

I am totally new to everything regarding social media, but I am a quick learner. My readers should know by now that I almost come along as an expert after my blog posts about Facebook and Twitter for birders. But the reality is that this is as new to me as it is to many of you. I see many potentials in my field “birdwatching” and as I am learning as I go along. Social Media has become a theme in my blogging. I think I am starting to find my niche in the blogosphere. Birding and Social Media.

One month ago, I had never heard of Guy Kawasaki. But the buzz on Twitter, made me understand this is a guy (sic!) everyone follows. I follow him on Twitter @guykawasaki and so does 94, 544 other people. It is fascinating, because he sends quality links to good reading. I am going to leave you in ignorance about his background and just tell you two things he has achieved that I am checking out right now.

First of all his virtual magazine and blog rack on alltop.com is an amazing resource. John Haydon wrote this blog how Alltop pretty much can replace google reader as RSS feeder to stay on top what others write. Sorry Google Reader, I have been sleeping with Alltop

Guy Kawasaki also wrote this book that I am reading online – but have no intention to buy. Reality Check. Check the link to the right to look inside. If you are interested in how to read books on line without paying for them, check out my two blog posts on the subject.

So do you think Guy Kawasaki minds that I am not paying for his book? Probably not, if you are to believe this interview he did with Chris Anderson of  Wired Magazine. This is when I understood that the book I am working on “1000 birds to see before you die” should be free of charge.

I am learning a few things from his unorthodox ways.  Today, I learnt that I need to secure clients in beforehand for the Amarakaeri lodges in the Manu area, in order to attract an investor to make a joint venture with.  I have an idea! Will let you know in due time.

Who has not heard of the book “1000 places to see before you die“? That is a bucket list for world travellers. Soon there shall be such a bucket list with 1000 birds for birders. I mean let’s face it. Most of us will not be able to see all the 10,000 birds in the world anyway, so we might as well keep the list somewhat realistic.  Even so, 1000 species is still a darn challenge that will be very hard, because some of the most wanted birds are either very rare, very hard to get to with strenuous walks and climbs, or extremely costly to get to.
But that is alright. Most of the people that bought the book “1000 places” book, will not fill their list either. It is living the dream and to always set a new goal that matters.

I cracked the idea, and now I decided I shall write a book! Nobody gets rich on writing birdbooks, so this will be a hobby project in which you can take part by helping selecting the 1000 species. When the book is done, you will be able to download it for free on our web-site.

Which are your top 100 birds in the world that you have seen and want to see. Just download this zip excel file – Birds of the World and mark your 100 favorites from the almost 10000 species in the world. Mark them giving your absolute most wanted bird 100 points, your second most wanted bird 99 points, etc.

I shall be doing the same exercise the coming days. To help me there are a couple of books that have been extremely important to me when dreaming about exotic birds that I may one day see. I just took them off the bookshelf and piled them on my desk. They are:

Additionally, inspiration for participants can be found in David Attenboroughs serie “Life of Birds”. It must be stressed that it is not only the bird it self that is represented in the final lifelist, but also a specific action. It could be a lek or display, a particular behaviour, or a mass-movement of one species. It may even be a particular spot on Earth where birds concentrate – and that the species chosen should be seen there. For instance, who would not want to see a warbler fall-out on High Island? What would be a representative species that could illustrate a fall-out? Please comment below!

Send your checklists to me kolibriexp@gmail.com when you are done. Best if you strip the list to just the 100 birds so the file does not become too bulky. I can help you if you have problems doing this selection. Just let me know. I need around 50 lists to have a good number spreading out the points. All participants in the early stage will be acknowledged in the book.
As I said above, this will be a free e-book. However, once the final product is done, I hope to liase with Birdlife International so that money can be raised – maybe through a Facebook cause – for species in peril. Please comment below – and send me your list!

Finally, a plug for a fine web-site that provides printable checklists – and that provided the world checklist you can download above.

What are chiggers anyway? 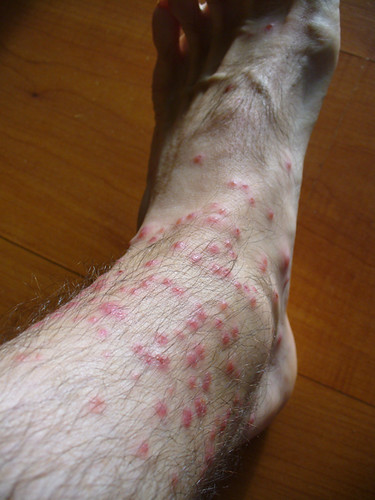 You don’t see chiggers. They can be a serious nuisance, because the itch is diabolic. I have seen severe infections after scratching chigger bites. For some people the itch goes on for a week!
So what are they? Actually, they are more than one sort – and that is the reason why there are so many conceptions and misconceptions about chiggers. Chiggers are normally referring to the larval stage of microscopic Trombiculidae mites (thus a small arachnid) and they bite but do not dig under the skin. However, a similarly named evil – the Chigoe flea a.k.a. as jigger – Tunga penetrans is common in South America causes similar symptoms – and in this case the little flea does bury underneath the skin to eventually produce eggs and detach. Since protection against both no-see-ums is similar….let us just concentrate on that.

How to protect yourself against chiggers

While some people would buy expensive protection with Permethrin soaked garments and others will get sulphur powder to dust their entire footwear, socks and pant-legs (it comes with a distinct rotten egg odor- and will not be popular among your fellow travellers using my technique!), here is the less high tech, less messy, cheap and fool proof way to protect you against chiggers

As from this moment, Kolibri Expeditions will provide to our clients free OFF in spray cans and rubber boots to size 43 European. If you need larger size, please consider bringing a pair from home to donate to us for the benefit of future travellers. Say no to scratching now.

Foto by Scott Zona by Creative common License on Flickr.

Two lifers and one Peru-tick on Tumbes pelagic.

No disease, but I knew I was going to see something good on this pelagic, as it was only the second one ever organized. The last trip organized in July 2008 has several good species that I have accounted for in a previous blog-post. 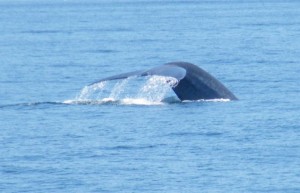 This trip was completely different. The sea was completely calm. In fact. it was quiet and birdless at times since there was no wind, but when we saw birds they were very good ones.  And we saw both Blue Whale (see picture above) and Bryde’s Whales, as well as some 15 Green Turtles. And my lifers? Parkinson’s Petrel and Flesh-footed Shearwater. The Sooty Tern, which I had previously seen on Tobago, was my Peru tick. 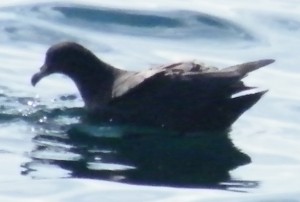 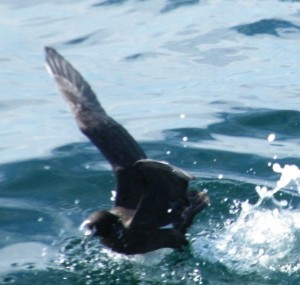 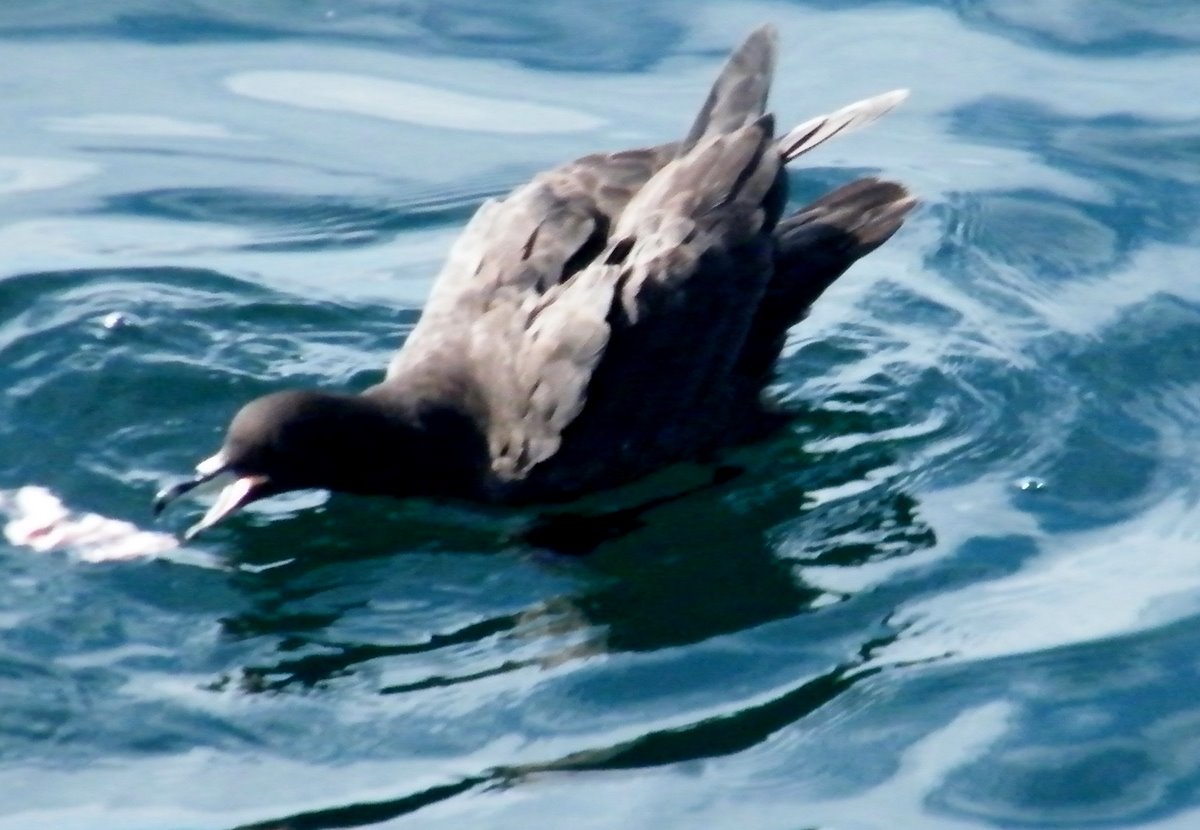 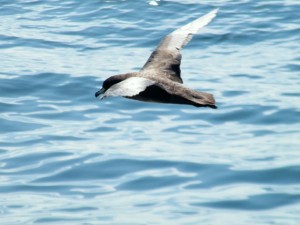 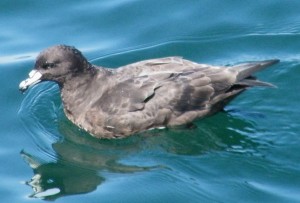 Parkinson’s Petrel. We saw 80 of this species. Noticing they were about the same size as Flesh-footed Shearwater but much smaller than White-chinned Petrel which was also seen on the trip.

Finally, in spite that my pictures are rather poor (taken with a cheap Fuji 15x camera), they illustrate well the differences between Flesh-footed Shearwater and Parkinson’s Petrel (aka Black Petrel). But not as well as this extrordinary photo by Stever Arlow. Do visit his fine site Birders Playground and especially his photos of birds from New Zeeland.

Next pelagic organized by Kolibri Expeditions run on April 18 from Callao, Lima. The next pelagic in Tumbes is scheduled for Nov 8. More surprises then?