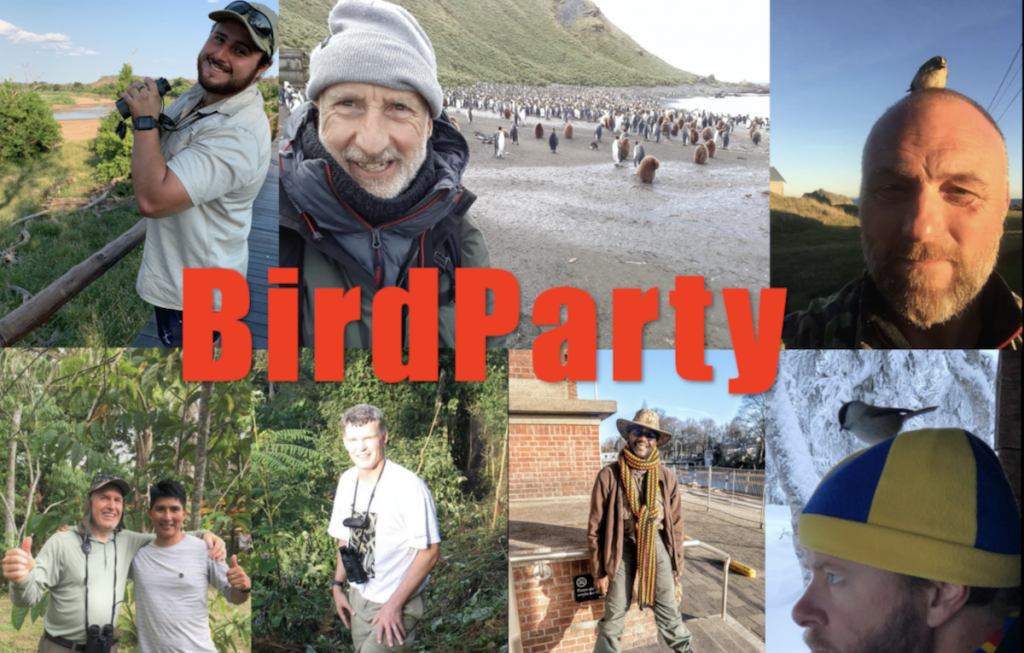 Johnny feeds the birds in the winter, but is getting more and more obsessed as the year evolves and soon sees himself chasing birds all over the world.

The song from the Swedish band Guran Guran, lead by birder and bird tour operator Gunnar Engblom from Kolibri Expeditions, tells the hilarious story of a birder named Johnny. (It seems almost every other famous birder is named John, Jonathan or Jon). There is a big surprise in the end. If you saw the film The Big Year with Steve Martin, Jack Black, and Owen Wilson you will know what extremes birding can result in… (rent with Amazon Prime for $3.99 or buy the book which is a great read by Mark Obmascik).

Birdwatching is a fantastic hobby that brings you closer to nature. It gives you tranquility and peace of mind, and during these difficult times during the COVID 19 pandemic that is like balm to the soul. However, there is a certain risk that one can become obsessed with birding. The Life List becomes more important than social interaction with non-birders.

See for yourself in this video. Does it remind you of anyone you know?

The video also shows some of the most sought after birds in the world. You can travel to them when this pandemic is over. They are birds you don’t have to be a birdwatcher to enjoy. And you don’t need to become obsessed.

7 Wonders Birding Tours makes short 5 day tours around the world to the best birds, the world heritage sites, and the most iconic mammals. The tours are suitable for complete newbies to birdwatching and bird photography, as well as more experienced birders who have little time.

Kolibri Expeditions has many birdwatching tours to PERU at different paces for different levels of birding skills. Even a tour where birdwatching, culture, history, and gourmet food are combined giving the very best Peru that has to offer in two weeks.

With A Little Help From Our Friends.

Thanks to all birding friends who helped with video clips and stills for the BirdParty video.  The video has now been released on YouTube (and Facebook), as well as an audio-version on all the digital platforms for listening, such as Spotify, Amazona, iTunes, Google Music Play, etc. Add it to your favorites and playlists. You can also download it for about 1US$.

Peru is now #10 in the world with the number of  COVID -19 cases. And seemingly the top is still not reached in spite of the quarantine since March 15. It means it will be many more months before any tours will run in Peru or elsewhere. If you liked the video, please share it with everyone you know and please consider downloading it, as it will give us a small contribution during these difficult times with zero income.

Another thing you can do is to make a Paypal donation to support both the continued birding services by Kolibri Expeditions and 7 Wonders Birding, as well as the creative process of Guran Guran.

In fact, any Paypal amount could be seen as a down payment for a future trip with us. 100% of the amount, I receive will be valid for three years as a deposit for any of our birding tours. You secure a birding tour of your choice and we secure a client. Win-Win!

Here is the full list of credits. Most people have given their written consent for the use, but in a few cases, I have not been able to get hold of the photographer/videographer. Still, it is fair use with very short snippets, and fully credited, so I hope there will not be future lawsuits against me for breaching copyright.

In order of appearance:

Birdcalls at intro and outro:

In 2016, Gunnar re-launched his rock’n’roll singer career with his band Guran Guran, and in 2019 they released a new video – Feels Like Some Summer – also available on Spotify and other digital outlets.