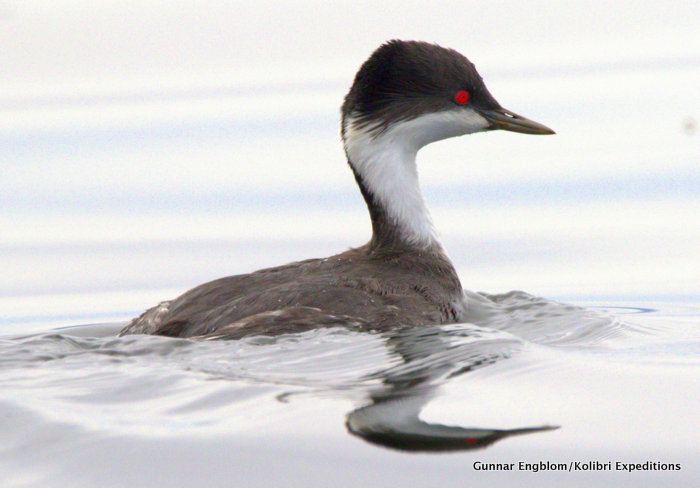 Of 23 grebes worldwide, 3 have gone extinct the last 40 years. Junin Grebe may be next. We may not even notice. We must ask the question “Why does the population of Junin Grebe increase?” instead of “How many Junin Grebes are there?”.

If you are connected with me on social media, you should have seen that Kolibri Expeditions has started a fundraiser to collect funds so that local guide Cesar Cevallos could do a daily count of the Junin Grebe in the nesting area.  So before anything, have a look at the Junin Grebe campaign on IndieGoGo.  The campaign will run for two months. Please email your friends, blog about it, message your friends, tag them when you share this campaign on social media, and finally do consider making a contribution, if even as small as one dollar, one euro or one pound. Many small donations increase the GoGo factor algorithm, and more exposure on the IndieGoGo page.

If you read the project description on IndieGoGo, here is some more information and background.

Why did we start this project?

As a birder, bird guide and biologist, I do sometimes come across places and issues where my company Kolibri Expeditions could make a difference with relatively small means. In November 2014, I had a tour with Ashley Banwell to the lake and only 2 individuals of the Junin Grebe could be identified. Yet this ought to have been the time when almost all the birds should have been out in the open waters of the lake. It was only a short visit, and it may have been that we simply did not stay long enough and covered a sufficiently large area, so while the observation by no means was statistically significant, it still raised my concern, that perhaps the Junin Grebe could go extinct and we would not even notice. Later in early 2015, I returned to the lake with Toby Nolan from BBC, and together with Cesar Zevallos the local guide, we started thinking about getting Kolibri Expeditions to do a fundraiser among clients and friends, so that Cesar could collect data on a daily basis. Because of robbery of a $5000 worth of equipment a month later, and all my Junin Grebe picture and video gone, the project was postponed until now.

How many Junin Grebes are there?

It would be easy to use the slogan “Save the Junin Grebe”. Our project alone will not save the Junin Grebe. Our project will put some focus on the need of continuous monitoring and to find some answers. We have not been asking the right questions. Up until now the main focus during inventories has been to answer the question “How many grebes are there in total in the lake?”. The box below shows the difficulties in coming up with the right number (Source BirdLife International).

It is hard to extrapolate a series of point counts transects, because the Junin Grebe is located in clusters on the lake, and will occupy different areas depending on season. The researchers have concluded that a total count is the best way to get the most accurate number of birds present. However, total counts are difficult to stage. They need to be done in the dry season with the lowest possible water level when practically all the birds are in the open water. Even so, birds may disperse into the reed pools in some areas and there is always a risk of mis-identification with the similar Silvery Grebe, as well as the risk of birds taking cover or diving before it can be ID:ed correctly. Working with binoculars on a rocky boat is difficult and birds being very shy does not help to get a certain identification.

Even when we have the numbers, it is hard to make certain conclusions

I will show some numbers below from some recent surveys and speculate some. The speculation does not take water level into account since I don’t have these data. It is possible that one could make reasonable overall counts if the counts are total and done in the months with lowest possible water level. The lowest water level vary from year to year. Such studies should also be supplemented with digital photography to accurately ID distant birds. Yet, history shows that so far yearly counts have not been made and these counts have rarely been total. It is a costly operation requiring many people. And it is extremely hard to compare numbers from year to year, which you can see in the box above.

The detailed survey carried out in 2001 had no less than three total counts of the population while surveying the open water of the lake. These surveys highlights that the numbers can vary a lot.

Presumably, there were breeding birds in the reeds in May, and still many birds with young in the reeds in August, while practically the whole population was in the lake in November. In November 2002, the survey was repeated and the whole idea with that survey was that the same methodology was to be used and that the survey method in 2001 could serve as standard. Whether it was carried out the same way in the end and if there were hardships to take into account, I don’t know.

Similarly, unpublished data from 2015 using standardized methods and partial counts (I am not quite sure what parcial counts means, but I assume they concentrate surveying the area of the lake where the grebes hang out rather than wasting time in the northern part where it has been shown, that the biotic conditions are very affected by mining pollution and hence there are no or very few grebes), give these numbers (Alan Chamorro, ECOAN pers comm).

The numbers from 2001 and 2015 show that it is extremely difficult to get reliable counts. And the number will vary depending on which time of year the count is made. The low October in 2015 number is probably due to displaced birds. However, if one cannot detect real change for certain, how useful are the total counts if in worst case scenario there is an actual 27% decrease (325 to 238 birds) in one year. The Grebe could go extinct in front of our eyes and we would not even notice, because we would tend to see aberrations in the numbers as aberrations rather than facts.

We are not asking the right questions.

So instead of asking, How many Junin Grebes are there exactly?, we should ask Why is the Junin Grebe population not increasing? A statistically replicable and continuous count, is needed. Our project is different, as we shall monitor on a daily basis the breeding success. Incredibly, this has never been done before (well, I was just informed that a similar limited study was carried out in 2008, although the results are not published. In any case it will be interesting to compare the results). With the simple data collected, we will be able to extrapolate the cause why the population is not increasing.

Is it because rapid changes in water level destroys the nest? Is it because of starvation (possibly due to lack of fish, which could be explained by changed biotic conditions from mining or human waste)? Or is because of poisoning from mining pollution (dead eggs and birds will be collected for toxicity tests)? Or is there predation (possibilities include Andean Gull or big trout occurring in the lake)?  Once we find out, we can ask: What can be done to increase the population? Once we know what needs to be done, then we can start asking How?  The How, shall need many parties of the issue to work out solutions together. Here the the role of ECOAN (a conservation NGO) and SERNANP (State Natural Resource Bureau) shall play a tremendous role building the bridges for communication with the different parties.

Support and pay the Junin Grebe a visit

Support the Junin Grebe campaign now. You may also use our Paypal (kolibriexp@gmail.com) directly or bank directly (especially if you plan to visit the Grebe yourself) and this way avoid the 5% fee that IndieGoGO charges.  Here are a couple of links if you want to see the Grebe yourself.

Please also comment on the campaign page. This also helps the GoGo score. Thanks for your support.

Gunnar Engblom is a Swedish birder who lives in Peru since 1998, where he operates birdwatching and nature tours for Kolibri Expeditions. He is popular guide both for hard core birding groups, as well as for groups who combine photography, nature and/or culture. He is also a dedicated 3:14 marathon runner, right now training for Chicago Marathon on October 9. And he has a past as sing-songwriting busker in the subway of Stockholm and the punkrock band Guran Guran 25 years ago – and is launching a rock’n’roll comeback during 2016!

2 thoughts on “The Junin Grebe may go extinct and we did not even notice.”